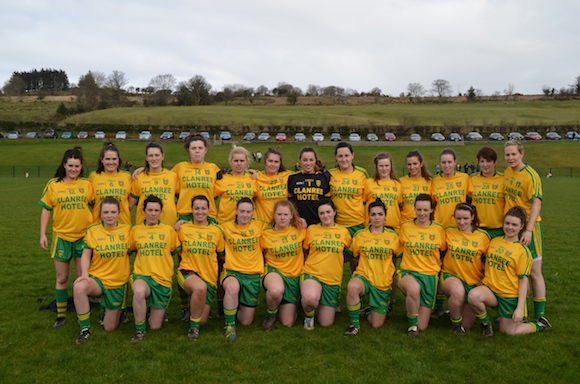 Geraldine: Missing from the action this weekend

ARMAGH will be slight favourites against Donegal’s Ladies on Sunday – but the roar of some extra Donegal fans might just swing things our way.

With the Minors and Senior Men playing at Clones earlier in the day, a quick jaunt up the road to Lisnaskea will hopefully entice football fans to go and support the Senior Ladies in their Ulster Championship semi-final clash with the Orchard County (throw-in at 5pm).

“Both sides will be in Division 2 of the league next year,” says Donegal manager Davy McLaughlin.

“We were relegated from Division 1 having lost all the games, whilst Armagh were promoted from Division 3 having won all of theirs, so they are probably slight favourites because of that; they’ve been winning.

A few extra supporters from Tir Chonaill might help.

“I was delighted with the slot and venue; it means fans leaving Clones can stop off in Lisnaskea, get a bite to eat and come and support the Ladies,” says Davy.

He has lost some well-known players for various reasons “but we’ve planned for most of those” says the Moville man.

Therese McCafferty and Roisín Friel are in America on holidays.

He knew he’d be without Geraldine McLaughlin after a cartilage operation, but has also now lost her sister Nicole to a hamstring injury. His own daughter Niamh will be missing as she’s still at college in Britain.

“I saw Armagh beat Tyrone and they beat them well, so they’re a good team,” says Davy.

“But we’re going to go in and give it a go. If fans from Clones come along and get behind the girls, it might give us that wee edge and get us to an Ulster final.”