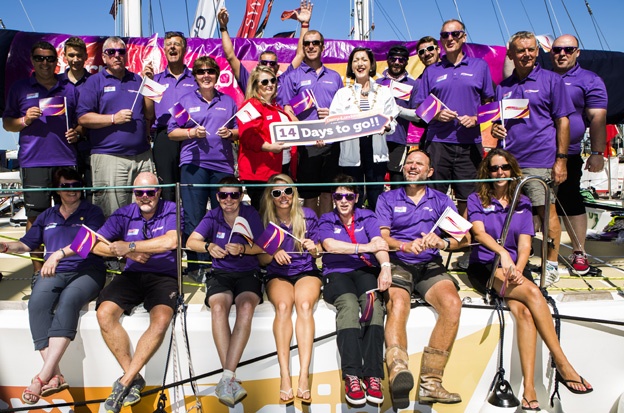 The crew of the Derry Clipper with Mayor of Derry Brendan Stevenson before setting off from New York.

A Donegal man has skippered the Derry “LondonDerry” Doire to an historic victory in the 14th race of the Clipper Round the World Yacht Race.

Provisional results put the Derry Clipper in the lead when racing finished off the Donegl coast at 1.00pm.

Skipper Sean McCarter, from Buncrana, and his crew now must wait for the official result which will be declared after each team’s distance to the original finish line off Greencastle has been measured to determine their final positions with the final.

In winning, the Derry Clipper has become the first boat to win a race to its home port.

Sean McCarter, skipper of the Derry Clipper, said the crew were now looking forward to their arrival in Derry tomorrow.

And he revealed his relief at clinching the historic win.

“Yesterday didn’t begin very well. We thought we had a reasonably good run during the six hours leading up to the 06:00 schedule and were excited to see how we fared against Team Garmin, Jamaica Get All Right and PSP Logistics.

“The excitement quickly turned to heart-sinking dread when we saw they had all outperformed us yet again in what should have been lighter conditions for them.

“We were in second place for the first time in over a week, trailing Team Garmin by a mile or so.

“We continued to gain through the day but eventually began to run out of breeze. We gybed north on a wind shift and knew we’d be giving away miles in the short term for a long term gain.”

The boats will now “make best speed” to the Foyle with the first yachts expected at Greencastle around 9.00am tomorrow with thousands expected to line the quayside to welcome the Derry Clipper which is expected to arrive at the Foyle Marina at approximately 1.00pm