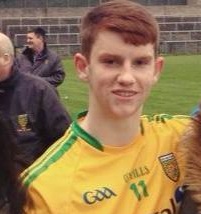 DONEGAL’S Minors are through to the Ulster Championship Final after a stunning second half display which blew away opponents Antrim today.

Donegal had been edgy in the first half, sending too many shots short.

Keeper Danny Rodgers pulled off two fine saves for Donegal to prevent certain goals; that coupled with a late first half goal by sub Ethan O’Donnell helped Donegal to a 1-07 to 0-06 lead at the break.

But Donegal made no mistakes in the second half with Downings man Lorcan Connors having a fine game.

He with Jamie Brennan and O’Donnell were the star performers in the second half, Brennan hitting the second goal early on to deflate the Antrim challenge.