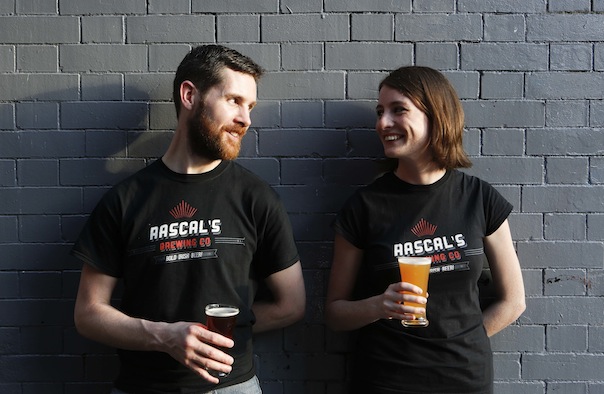 CHEERS FOR THE BEERS! DONEGAL WOMAN OPENS HER OWN BREWERY!

Cathal and Emma get the beers in!

An Inishowen woman doesn’t have to shy away from buying her round after opening up her own brewery.

Emma Devlin, from Malin Head, has just launched Rascal’s Brewing Co in Dublin along with her partner Cathal O’Donoghue.

The couple met in Australia, fell in love and decided to return to Ireland to give their new business a real go.

The couple now produce a range of‘Bold Irish beer’, three of which were showcased at the launch – Ginger Porter, Big Hop Red and Wit Woo (a Belgian wheat beer).

Taking place at The Mart in Rathmines, the launch was attended by craft beer lovers from all walks of life.

Emma said “Rascal’s was born out of our love of craft beer, which we discovered some years ago while living in New Zealand. When we moved home, we invested in home-brew equipment and began brewing with all-grain and fresh leaf hops.

“2013 was a very successful year for us as we won two competitions with our beers, Belgian Wit and Ginger Porter. This boosted our confidence and things developed from there.

“We find that people are bored of mainstream, mass-marketed lagers – they’re turning to craft beers because they give quality and value for money in terms of flavour. There’s also that wonderful sense of discovering something new.’

Adding to this, Emma’s partner and co-founder, Cathal O’Donoghue said: Rascal’s is about brewing craft beer with a little something extra – which they call BOLD IRISH BEER.

“We like to brew with unusual ingredients like ginger, as in our current beer, Ginger Porter. We’re a small brewery, 950L batches, and this small scale allows us to be more experimental, which is something we love. Our plan is to brew a variety of seasonal ales and not focus on the core supply as much as other breweries. We want to keep things interesting for the customer and for ourselves, as brewers.”

Rascal’s Brewing Co. now supplies its beers to pubs across Dublin including The Norseman, The Black sheep, 57 The Headline, and Blackbird.

Emma and Cathal have big plans for the brand and hope to sell Rascal’s beer across the island of Ireland by the end of the year.

CHEERS FOR THE BEERS! DONEGAL WOMAN OPENS HER OWN BREWERY! was last modified: June 23rd, 2014 by Stephen Maguire