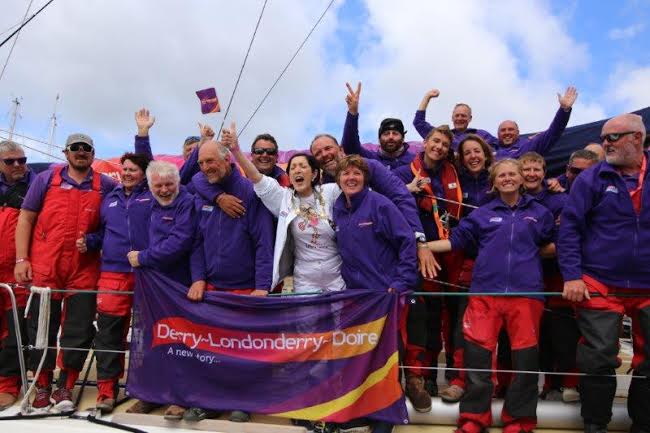 The crew of the Derry Clipper celebrate their homecoming with the city’s Mayor Brenda Stevenson.

The Donegal skipper of the victorious Derry “LondonDerry” Doire yacht was given a hero’s welcome when the boat sailed into its home port this morning.

The previous day, Sean McCarter, from Buncrana, steered the Derry entry to victory in the 14th race (from New York) of the round the world challenge.

Several thousand people lined the quayside on the River Foyle to welcome the Derry Clipper home.

The yacht was accompanied by a flotilla of around 20 boats,  including the Lough Swilly Lifeboat from skipper McCarter’s home town.

Several thousand cheered and waved as the yacht docked to the sound of fireworks and “Danny Boy” and “The Town I Love So Well,” performed by the combined local church choirs.

Mayor of Derry, Cllr Brenda Stevenson, was on hand to “pop” the champagne and cases of Guinness were “at the ready” for the crew which had been “dry” since leaving New York just over two weeks ago.

Speaking before coming ashore, Sean McCarter said he was “overwhelmed” by the welcome.

He said: “After almost 40,000 miles it’s unbelievable to be sailing into Derry and even more so in first place.

“We have had several boats come out to meet us at six o’clock this morning and the flotilla has been growing ever since.”

He added: “We always knew it was going to be something special, but this is more than we expected.”

The yacht’s arrival in Derry saw an emotional one for Andrew Taylor, the crew member who fell overboard in the North Pacific.

Andrew, who was swept away from the yacht by high winds, was rescued after spending around 90 minutes in the water.

His family were on Derry’s quayside yesterday to meet him for the first time since the dramatic incident.

He said: “I’m fit and healthy. This is a big moment for me. I have spoken to my family over the phone but I have not seen them for months.”

“It certainly has been very emotional day,” he said.

“To receive such a great welcome in Derry is amazing, but to have mum and dad here as well makes it all the more special.”