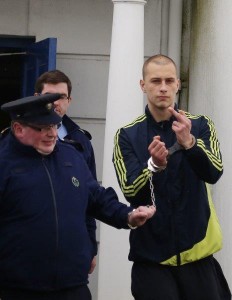 MAN SENT FOR TRIAL FOR MURDER OF BOGDAN

A 20-year-old man has been sent for trial to the Central Criminal Court in Dublin for the murder of popular Letterkenny resident Bogdan Michalkiawicz.

Kryszstof Grezegorski, who is 20, had been remanded in custody charged with the murder Mr Michalkiawicz.

Grezegorski, from 35 Hazelbrook Crescent in Letterkenny, was charged with the murder of the 41-year-old on May 15 last year.

Mr Michalkiawicz was found dead at his Riverside apartment in Letterkenny. He had been last seen alive two days earlier.

Grezegorski stood in court alongside a prison officer and had today’s hearing translated to him.

Detective Sergeant Mick Galvin told Letterkenny District Court that he had served the Book of Evidence on Grezegorski this morning.

Sgt Galvin told the court that there were two volumes in the book of evidence and the Director of Public Prosecutions had directed the murder trial be held at the Central Criminal Court in Dublin.

Judge Paul Kelly told the Polish national that if he intended to provide an alibi in the case, he must provide this to the prosecution within 14 days.

The case was put back until June 30.

Defence solicitor Patsy Gallagher said he understood the case would go ahead in November and that the case may be heard alongside that of a second man also charged in connection with the murder.

Legal aid for two counsel was approved. Grezegorski was remanded in custody.

MAN SENT FOR TRIAL FOR MURDER OF BOGDAN was last modified: June 23rd, 2014 by John2