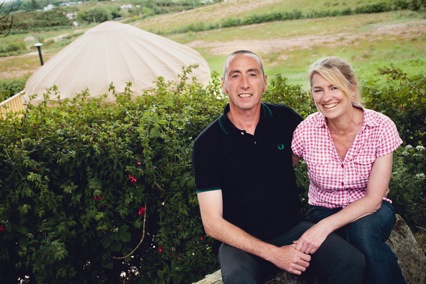 Sean Coll and Helen Haworth who have developed Portsalon Luxury Camping on a beautiful location in Portsalon overlooking Ballymastocker Bay.

Tucked away on a hillside overlooking the spectacular Ballymastocker Bay, Donegal’s newest tourist destination – Portsalon Luxury Camping – is home to the county’s first yurt site and it all came about thanks to a chance meeting at a music festival in England that led to love!

Yurts are wooden framed, canvas-covered structures that originate in Mongolia, but the owners of Portsalon Luxury camping Helen Haworth and Sean Coll, found themselves living in one on their own site in Portsalon a few years ago, and from there the idea of developing the tourist attraction grew.

Helen was brought up in Shrewsbury in England before moving to Leeds but after meeting Sean at a music festival and experiencing the long-distance relationship thing for a while – (because Sean was living in Portsalon), she had to make a choice.

“We visited each other every weekend we could manage for a while and quickly decided we would like to be together.

“I loved inner city Leeds with its colourful and crazy characters and the constant buzz of activity but I had been there a long time and along with the vibrancy of the inner city came all of the dark side too.

“I was tiring of it and craving a more peaceful existence.

“Sean was also the main carer for his mother who lives in Portsalon, so when we had to choose between Leeds and Donegal, there was only going to be one winner,” said Helen.

Sean had inherited a site once owned by his granddad that had passed through the family in Portsalon and although he had lived there for a while, he had moved away for a number of years and spent time working in Stoke and London before his return.

The house on the site had been left to the elements for a number of years, but when Helen decided to come to live in Donegal they began to think about renovations.

“We initially stayed in a rented property in Letterkenny but wanted to be as close to the site as possible when the work was being done.

However, Sean didn’t want to live in a caravan during the renovation as he had done this as a 10-year old-boy when he arrived in Portsalon from Glasgow.

“I had seen yurts years ago at an environmental centre in Yorkshire and loved them and we had also seen them at festivals.

“So, we decided on a yurt, bought a build your own yurt book on Amazon and went about building our own to stay in during the renovation.

Specialist local carpenter Andrew Gibbons helped Sean and Helen with the wooden frame and Helen sewed the canvas on a small sewing machine to make the first yurt on their fabulous site.

And, it was while living there during the house renovations, that the couple first had ideas about renting it out to make some money after they had finished the renovation.

Those plans soon took on a whole new life.

To sound out the idea at the start, Helen attended a Big Step event hosted by Donegal County Enterprise Board, moved on to a Start your Own Business Course and then took a place on Donegal’s first Discovery Zone programme where she really tested the idea to the limits.

“It was tough and challenging – particularly as throughout the course we were living in a yurt with no electric – no broadband – and no water!

However Donegal County Enterprise Board were amazingly supportive and allowed use of their offices etc.

Discovery Zone left me with a good robust business plan and the presentations mid and end definitely put forward our idea to some important contacts.

The plan to maybe rent out one yurt also became a much bigger and much more viable enterprise than it ever had been.

Among the contacts made at those Discovery Zone presentations were staff members from Donegal Local Development Company.

The project was then funded by DLDC Ltd under the Rural Development (LEADER) Programme 2007-2013 and with that assistance and grant aid – and a lot of perseverance from Helen and Sean – Portsalon Luxury Camping became a reality and already guests have been flocking to the site.

“We’ve had all sorts of setbacks along the way but we just kept going and stuck at it and we now have five luxurious Yurts (four of them constructed by LPM Bohemia) on a breath-taking site.

In keeping with the natural beauty of the surroundings, guests can enjoy fresh salad and herbs in season from the garden and fresh eggs from the hens on the site, but of course there are luxurious amenities as well including brand new toilet and shower facilities, a beautiful new kitchen/lounge for guests and even free wi-fi.

Some of the first guests have hailed from England, Scotland, Northern Ireland, Canada, Germany, Dublin and Inishowen and the site has received terrific reviews on Tripadvisor.

“People are very interested and they are keen to see something different and unusual doing well in the area.

“To let everyone know what the place is like we are holding an open day on Saturday 28th June from 2pm-5pm so people can call and have a look around some of the Yurts and the site, Sean said.