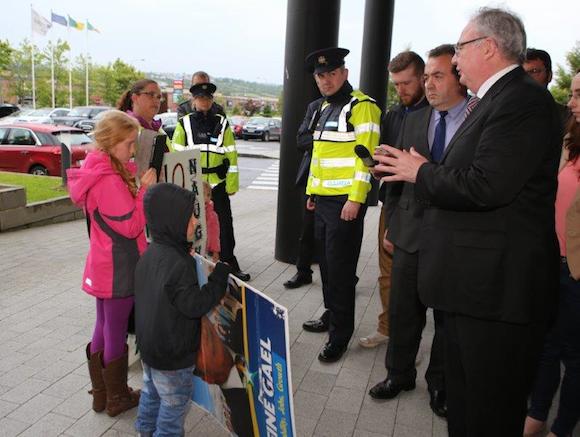 IS THIS THE END OF DONEGAL PROTESTS? JUST ONE MUM, 3 CHILDREN TAKE ON MINISTER

JUST four people turned out this evening to protest at the presence of natural resources minister Pat Rabbitte on a visit to Donegal – and three of them were children.

Just Corina McCallig and her children Nikita (10), six-year-old Ethan and little daughter Emily, who is three, bothered to protest outside the Radisson Hotel in Letterkenny.

The minister was in the town the mark the ending of work on a new high-powered electricity line finishing at a switching station in Glenties.

Protest groups – and farmers – had opposed the 110 kilovolt line, claiming it had ruined the countryside.

However Eirgrid and the Minister have insisted Donegal needs stable power supply to help attract jobs and investment to the county.

Ms McCallig had somehow gotten her hands on an election poster belonging to Fine Gael councillor Terence Slowey – and turned it into a protest poster against Irish Water.

“I’m still here,” she said when asked why so few people were continuing to protest against water and property taxes.

“I won’t stop protesting. This government has sold us all down the river. They’ve taxed our homes, sold off our water and sold off our gas and oil and natural resources.”

She then turned on the Minister when he arrived, heckling him. She told him: “You’ve sold all our natural resources Minister. My children will have to leave this country because of you.”

Minister Rabbitte, who is expected to be axed from the Cabinet in the upcoming reshuffle, said he was doing what was in the interests of the country.

But why so few protests now in Donegal?

“I’m here with my children,” said the mother of three.

“I won’t stop speaking up for our children.”

There was a significant Garda presence in the area, but no real protest to police. Just one Garda stood alongside the mother and her children.

IS THIS THE END OF DONEGAL PROTESTS? JUST ONE MUM, 3 CHILDREN TAKE ON MINISTER was last modified: June 26th, 2014 by John2