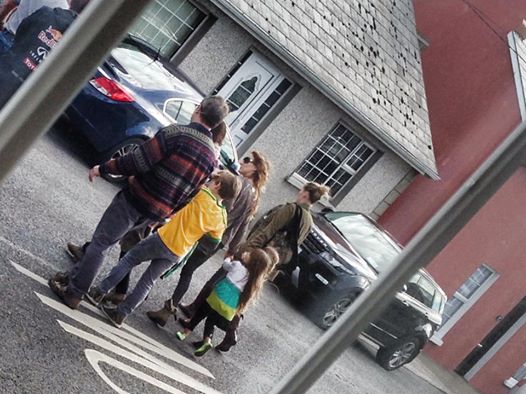 SEX AND THE CITY STAR SJP IS BACK AND TIPPING DONEGAL FOR ALL-IRELAND!

Exclusive: Sarah Jessica Parker and her family have jetted back into Donegal and have even become GAA fans.

The Sex in the City star and hubby Matthew Broderick own a holiday house in Kilcar.

And the Hollywood stars have arrived back to enjoy a few days of relaxation there.

The couple’s son James was even spotted wearing a brand new Donegal jersey in Dunkineely.

The family enjoyed a bite to eat in the famous Baskin’s Fish and Chip Shop yesterday.

And the mystery of the Donegal jersey was solved when Gareth Britton of All Sports in Donegal Town told Donegal Daily the family had been to his shop.

“They called in yesterday and didn’t create any fuss at all. They have been in to us before.

“They bought three or four Donegal jerseys but they didn’t get any payers names on them.

“We didn’t ask them to pose for photos or anything like that. I think they just prefer to be left alone – I think that’s why they enjoy coming to Donegal and relaxing,” he said.

The couple are understood to be staying in Donegal for a couple of weeks before jetting back to America.

SEX AND THE CITY STAR SJP IS BACK AND TIPPING DONEGAL FOR ALL-IRELAND! was last modified: June 28th, 2014 by Stephen Maguire