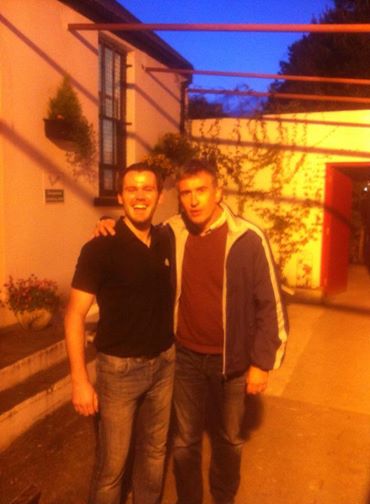 Actor and comedian Steve Coogan was in Dunfanaghy over the weekend and popped into local bar Patsy Dan’s for a few pints of Guinness.

Coogan who is revered for playing the role of DJ Alan Partridge, has visited Dunfanaghy in the past, and is said to love the beaches and scenery that surround the picturesque village.

Coogan was served by St.Michaels footballer Brendan ‘Bean’ Rodden who said Coogan was in great form all evening.

The teak tough corner-back said Coogan was a gentleman and happily posed with those who wanted pictures with the star and even told a few jokes.

“He probably just wanted a couple of quiet pints, but it’s not often we get celebrities like him in the bar so he got a lot of attention.

“He was great craic though, and even told us a few jokes, and he posed for snaps with anyone that wanted them, he’s a legend.