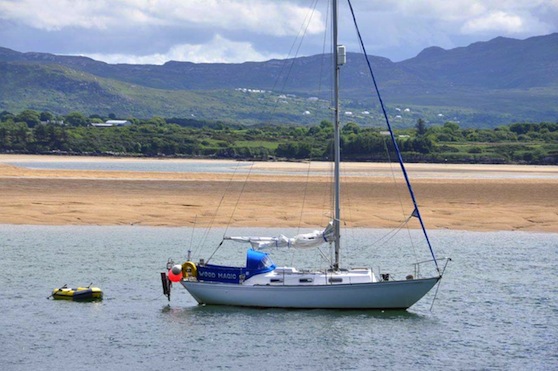 Wood Magic, the yacht at the centre of the mystery moored at Sheephaven Bay, Ard on Sunday. Photo by Moses Alcorn.

Mystery still surrounds the discovery of an empty yacht found anchored just 100 yards off the coastline at Ards for the past ten days.

The discovery of the yacht, named Wood Magic, has sparked a series of sea and shore searches on both Saturday and yesterday.

There has been no trace of the skipper of the vessel who is believed to be from Inishowen.

The scene at Ards, Sheephaven Bay, Donegal where the search has been launched for a missing skipper on Sunday. Photo by Moses Alcorn.

Gardai joined the Mulroy Coastguard along with the Rescue 118 helicopter from Sligo as searches continued yesterday.

Gardai were alerted to the situation by the man’s family on Saturday.

It is now believed they are treating it as missing persons investigation.

A dingy was found attached to the yacht by a rope raising suspicions that the man could not have made it to shore unless he swam.

It is believed that further searches will take place today.

But so far there has been no sign of the skipper of the yacht.