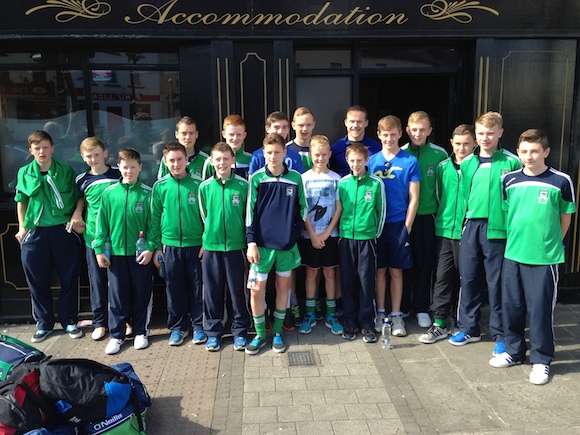 By Alan Martin, MacCumhaills: Having won the County Under 13 Championship, Sean Mac Cumhaills represented Donegal in the All Ireland Feil Na Peil that took place in Connacht last weekend.

Our host club were Ballaghaderreen in County Roscommon.

Our first match was against Shamrock Gaels on on Friday evening in Ballintober. The lads made a slow start and were two points up at half time. They settled well in the second half and won on a scoreline line of 4-07 to 1-03. Next up were Wexford champions Naomh Eanna. This time the boys started brilliantly and continued in the same vein for the rest of the match. Final score was 6-04 to 1-02. The lads returned to their host houses after the matches.

Saturday morning saw us pitted against our host club Ballaghderreen. A win would leave us top of the table and automatic qualification into the Quarter Finals. Again the lads turned on the style and were comfortable winners, 6-06 to 1-06. The team returned again to the host houses to rest up for the evening quarter final.

Our opposition were a much fancied team from Roscommon called Clg Oran. Mac Cumhaills got off to a great start and were 8 points up at half time. The second half was a joy to behold as Mac Cumhaills kept Oran scoreless whilst scoring at will themselves. Full time was 6-07 to 1-02.

We returned to Durkins Hotel in Ballaghderrreen where the lads were fed and presentations were made to the host families. We were also treated to a wonderful Irish Dancing display by 4 times world Champion Ronan Kelly.

Sunday morning saw the team travel to the Connacht Centre of Excellence were all the Semi Finals and Finals were taking place. Gac All Saints from Ballymena were the team drawn against us. We had a huge travelling support down from Donegal to cheer on the lads. We started brilliantly scoring three points on the trot. All Saints settled and scored two back. In the last min of the first half All Saints scored a goal which left us two points down at half time. The second half was very tight. Unfortunately it was one of those days were nothing fell right for us. The lads busted themselves trying to level the match but there was a goal between the teams in the end. All Saints 1-04 Mac Cumhaills 0-04.

The lads can hold their heads up high as they have done the club and county proud, on and off the pitch over the weekend. Well done to all the lads and management.