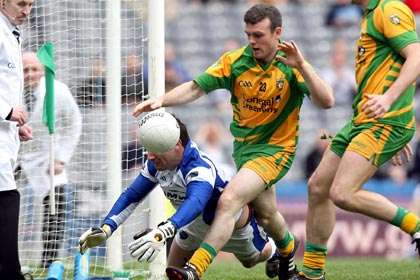 The 2012 All-Ireland winner has agreed to sign with the Finn Harps Reserves side who play in the USL for the remainder of the season.

Hanlon has been in brilliant form for Dungloe this season, and his form has propelled them to the top of Division Two.

His form prompted a recall to the Donegal set-up but Hanlon declined the offer.

Hanlon is a talented soccer player and has played for Keadue Rovers for the past number of seasons.

Finn Harps Reserves manager John Francis Doogan has also secured the services of another Keadue Rovers player in the form of Corey Gallagher, as he bids to strengthen his side for the remainder of the USL season.

There has been surprise expressed following the departure of Johnny Bonner from Finn Park.

It’s believed Bonner became frustrated at the lack of first-team opportunities afforded to him and decided to leave.