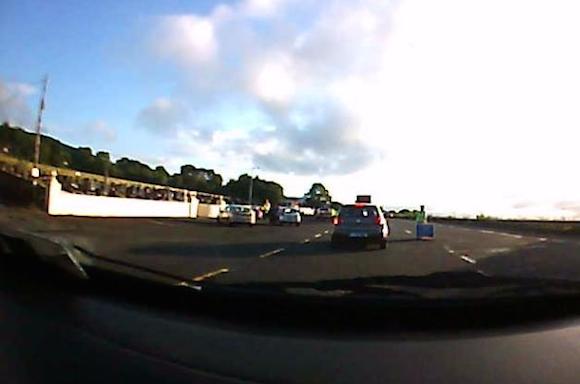 The checkpoint at Burt

THIS was the scene in Co Donegal last night as locals and visitors alike had their cars checked by Revenue officials – to make sure no-one was driving a UK-registered vehicle whilst living here.

There were long tailbacks on the N13 at Burt as inspectors checked each vehicle.

John Daly, from Downpatrick, Co Down, who was in Donegal for a family break in the county was among those stopped.

He said the delays reminded him of “what it was like 20 years ago when trying to cross the Border.”

Donegal Daily has learned that multi-agency road checkpoints will soon be deployed here in the county.

These will involve Customs, Gardaí and Social Welfare inspectors – each organisation doing their own checks.

The idea behind including Social Welfare inspectors is to catch people travelling to or from work who are also claiming benefits, especially those who may be signing on in one jurisdiction and working in the other.

They have already been successfully deployed in several other counties.

Last night Revenue detected a number of UK-registered vehicles it believed were being driven by people who live in Donegal.

Anti-VRT campaigners say the Government is acting illegally and is in breach of several European laws on the free movement of goods.

They also say it is illegal for Revenue to seize goods more than the value of the alleged taxes owed.