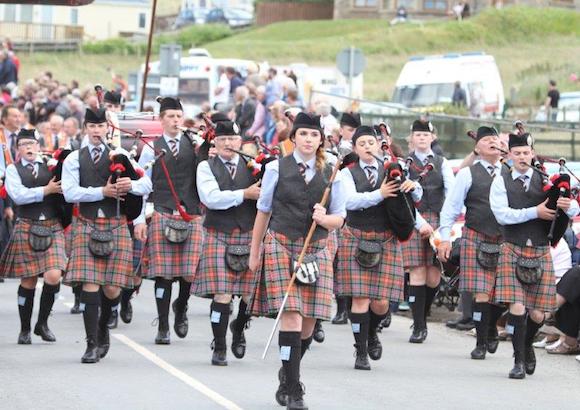 “Two years ago, our Grand Secretary Drew Nelson made a landmark and historic speech in the Irish Senate in Dublin. In a thoughtful and candid address, Mr Nelson spoke of the challenges facing all of us as we move forward together, and despite the horror of the sectarian campaign carried out in the name of Irish republicanism, underlined the Orange Institution’s genuine desire to see a normalisation of relationships on these islands,” he said.

“No more so was this illustrated by the momentous state visit of Her Majesty the Queen, here to the Republic in 2011. During her trip, the Queen visited sites of significance to Irish nationalism including the Garden of Remembrance and Croke Park in Dublin. Such gestures of reconciliation were hugely symbolic and carried out by Her Majesty with great decorum and respect.

“It is against this backdrop, and from this platform today, that I publically invite the President of the Republic of Ireland, Michael D Higgins, to join us and witness for himself next year the colour and spectacle of the only Twelfth demonstration in this jurisdiction.

“You will be made most welcome here in Rossnowlagh, President Higgins, and I trust you will accept the genuine invitation in the spirit of good will and neighbourliness in which it is intended.

“In your inaugural speech, you spoke of a “common shared future built on the spirit of co-operation”, about “equality” and “respect for all”.

“What better way to make such words a reality by reaching out in a hand of friendship to the minority Protestant community in the Republic; the symbolism of which would have positive ramifications beyond the boundaries of County Donegal.”

Mr Stevenson also upped the ante over a banned parade in North Belfast next Saturday.

“As we look forward to the 17 Twelfth demonstrations across Northern Ireland next weekend, we are also mindful of recent political developments following another disastrous decision by the Parades Commission regarding our brethren in Ligoniel, Belfast.

“This followed on from the shambolic and ludicrous determination preventing Orangemen from dedicating an arch in memory of an esteemed past member in Portadown.

“Grand Lodge is fully supportive of the united graduated response by unionism to this latest constraint on our legitimate cultural expression and traditions. Numerous other parades across Northern Ireland, as we know, also face continuing intransigent and deliberate opposition by republicans.

“We cannot underestimate the seriousness of the situation but there is no doubt that unionism is stronger when it is united and speaking with one voice.

“I have called an emergency meeting of all County Grand Masters and District Masters from all over Northern Ireland to inform them of our course of action and our engagement with the leaders of unionism. This will take place over the coming days.

“I would also reiterate my appeal, and that of the Institution, for any associated protests to be both lawful and peaceful. Violence should not prevail.”