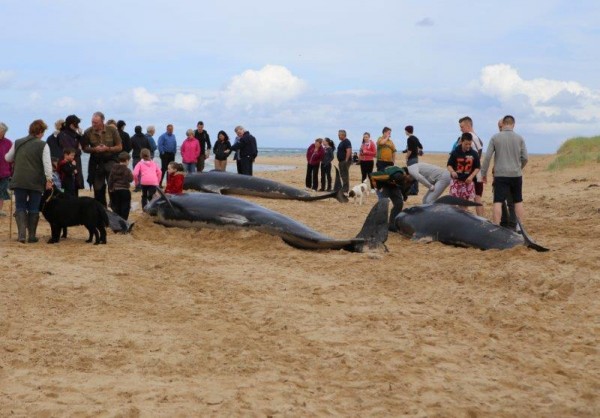 A large crowd have gathered on Ballyness Bay to help return the stranded Whales to the water. pic copyright nwnewspix

BREAKING NEWS: After a successful rescue of a number of Pilot Whales off Falcarragh today, it now appears that the whales have once again beached.

The whales were successfully guided back out to sea by local sailing operator Gareth Doherty from Gaoth Dobhair.

However just an hour later the whales had returned to the shoreline and are now languishing in very shallow waters.

“I have spoken to a number of people from the National Parks and Wilflife Service and we are of the opinion that the whales should be allowed to die.

“Nobody wants to hear that but it would appear that they will continue to beach now.

“Nobody wanted to hear that this morning and brave attempts made made to keep the animals alive.

“But it now appears that those efforts were in vain and we should just allow them to die,” he said.

Thousands of people have gathered at the shoreline at Ballyness Bay where the whales were first spotted by a jogger at 8am.

Five of the animals have already died and the others are in shallow water after being temporarily ushered back out to sea.

The National Parks and Wildlife Service are expected to make a decision on the disposal of the huge creatures tomorrow (TUES).

HEARTACHE AS PILOT WHALES LOOK SET TO DIE AFTER BEACHING ONCE AGAIN was last modified: July 7th, 2014 by Stephen Maguire