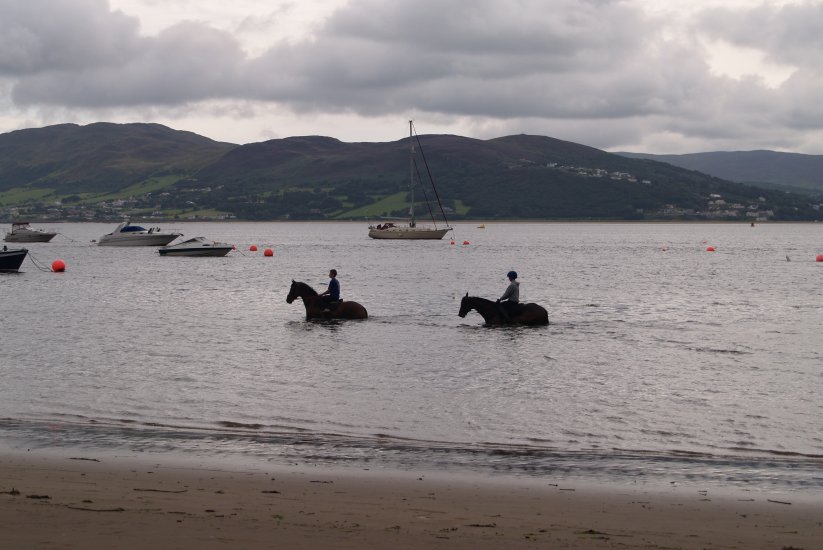 HORROR AS HORSE ESCAPES AND KILLS ITSELF ON BEACH BENCH

There have been calls for renewed safety measures after a horse bolted on a popular Donegal beach and killed itself after running into a bench.

Horses in the water at Rathmullan Beach

People were forced to flee after the horse galloped out of control at Rathmullan beach.

The saddled horse, which had earlier thrown off its rider at Kinnegar, headed towards the local pier but was diverted by a man holding another horse.

The horse then fell and impaled itself onto a seat.

The force of the impact was so severe that it unhinged the bolted seat form the ground.

The horse died at the scene following the drama on Wednesday night last just before 8pm.

One local person who witnessed the drama unfold said it was a miracle that nobody was seriously hurt.

“The beach and the surrounding area was very busy as it was a nice evening. Suddenly the horse came galloping up the beach form Kinnegar.

“I noticed a man with another horse trying to stop it but the horse, a beautiful brown animal, headed up a small slipway.

“It then lost its footing and seemed to slide right into the seat.

“The seat was actually shoved into the air after the horse hit it.

“The horse died later. It was such a terrible thing to see.

“If anybody had been siting on that bench they would have been killed or seriously hurt at least,” said the woman.

Signs have been erected on the beach preventing horse riding at certain hours.

HORROR AS HORSE ESCAPES AND KILLS ITSELF ON BEACH BENCH was last modified: July 9th, 2014 by Stephen Maguire