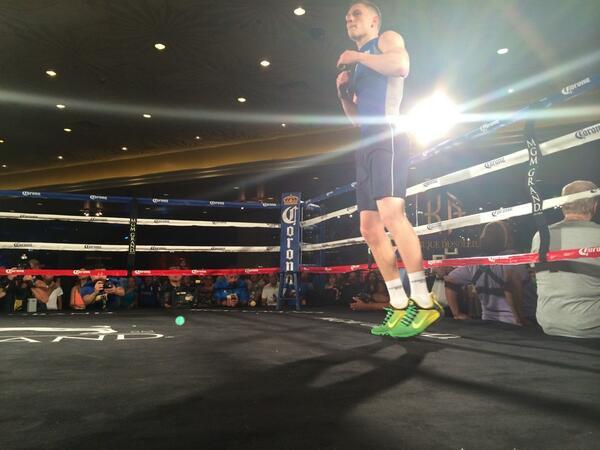 THIS is Donegal’s own Jason Quigley – in the ring where he will make his professional debut on Saturday night.

Jason is pictured in the right at the world famous MGM Grand Garden Arena in Las Vegas where he will face Florida’s Howard Reece.

The former Irish European Amateur Champion and World Championship silver medalist will battle the American fighter in the 4-round middleweight contest.

The headline bout is his Golden Boy Promotions stable-mate Saul ‘Canelo’ Alvarez, who takes on Erislandy Lara in a junior middleweight bout.

Brilliant Alvarez has been picking up on some of the Donegal lingo too – and has now taken to calling Jason “lad” in his best Irish accent!

GOLDEN BOY JASON TAKES TO THE RING TO PREPARE FOR BIGGEST FIGHT OF HIS LIFE was last modified: July 10th, 2014 by John2