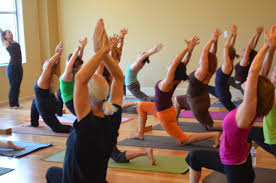 PRIEST LABELED ‘IGNORANT’ AFTER TELLING PARISHIONERS NOT TO DO YOGA

A parish priest has been called ‘ignorant’ after telling his parishioners they should not practice yoga.

Fr Padraig O’Baoill made his comments in his weekly issue of the Gaoth Dobhair parish newsletter.

Fr O’Baoill described yoga and other disciplines such as tai chi and Reiki as “contemptible.”

He wrote “As followers of Jesus Christ we should not partake in deeds that go against our religion. Accordingly, you should do not take part in yoga, thai chai or reiki.

“Do not put your soul in jeopardy for the sake of these contemptible things.”

However a leading local yoga teacher said Fr O’Baoill’s stance and advice to his parishioners was “ignorant.’

Sean O Tuathalain, who runs the Yoga Centre in Letterkenny, said he would like to meet with Fr O’Baoill to try to understand why he is urging people not to take part in yoga.

“I have to say that this advice appears to me to be coming from a position of ignorance.

“However, I think priests in general are skeptical of yoga and Reiki. I can understand where they are coming from but I think they need to find out more about these subjects.

“I would like to meet with Fr O’Baoill and to try and understand the reasons why he advised his parishioners not to practice yoga,” he said.

Mr O Tuathalain suggested that many people turned to yoga in Ireland after the scandal of clerical sexual abuse emerged.

“I know priests such as Fr O’Baoill may feel that yoga may have Hindu connections.

“But people in Ireland do not practice yoga for religious reasons. They practice it to find inner strength and inner peace and many people have done so,” he said.

Meanwhile Fr O’Baoill, who is currently in Lourdes, has said he will give reasons for his writings in the parish newsletter when he returns.

PRIEST LABELED ‘IGNORANT’ AFTER TELLING PARISHIONERS NOT TO DO YOGA was last modified: July 10th, 2014 by Stephen Maguire