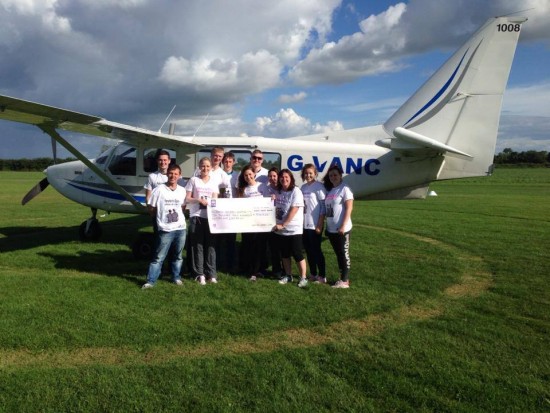 SKYDIVE IN MEMORY OF TWO BEST FRIENDS RAISES €10,000 FOR CHARITY

An emotional skydive to celebrate the memory of two best friends killed in tragic road accidents have raised over €10,000 for Our Lady’s Children’s Hospital Crumlin.

Shane Patton was killed in a road accident in Drumkeen on July 13th 2012.

Less than a year later in June 2013, his best friend Shane Brolly was killed when the vehicle he was a passenger in collided with another car.

Friends and family of the both men decided to organise a skydive to both celebrate the memory of their lives, and to raise money for the cardiac ward in Our Lady’s Children’s Hospital Crumlin.

Vicky Galvin who helped organise the wonderful event told Donegal Daily, “I’m pleased to say we safely completed our skydive in memory of our two Shane’s.

“While some other family members and close friends were in attendance to cheer us on.

“It was a very emotional day for all involved, but it was an amazing experience, and we know the two boys would be very proud of everyone involved.

“We managed to raise a total of  €10,413.52 and all funds will be donated to the Cardiac ward in Our Lady’s Children’s Hospital Crumlin.

The second anniversary masses for Shane Patton are being held this Friday 11th July at 7.30pm in St. Patricks Church, Drumkeen, and on Saturday 12th July at 6.00pm in Our Lady of Lourdes Church.