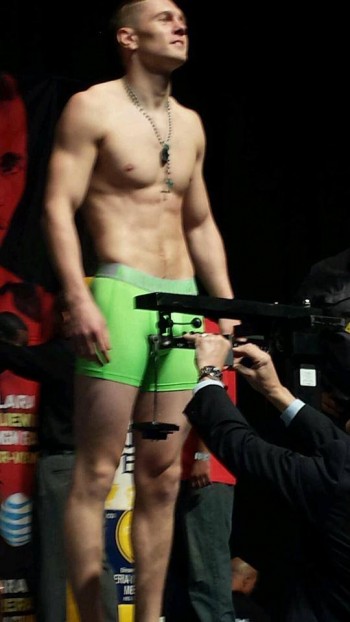 GOLDEN BOY JASON WEIGHS IN AHEAD OF PROFESSIONAL DEBUT

Jason Quigley looks in great physical condition for his pro debut against Howard Reece at the MGM Arena in Las Vegas.

Jason Quigley has weighed in before his first professional bout later tonight in Las Vegas, and judging by the pictures the Donegal boxer has got himself in sensational shape for the fight.

Quigley is on the undercard for the Saul ‘Canelo’ Alvarez’s fight with Erislandy Lara.

Just a few months later he made history, when he became the first Irish fighter to reach a World Championship final.

Quigley was narrowly defeated in that historic bout, but he had done enough to attract the attention of Golden Boy Promotions.

Quigley penned a lucrative deal with Golden Boy Promotions, with De La Hoya declaring that the Donegal fighter has the potential to go all the way to the top in Professional boxing.

Tomorrow night, Quigley fights at the MGM Grand Garden Arena, Las Vegas, which is not a bad venue to make your professional bow.

Good luck Jason, the people of Donegal are behind you.