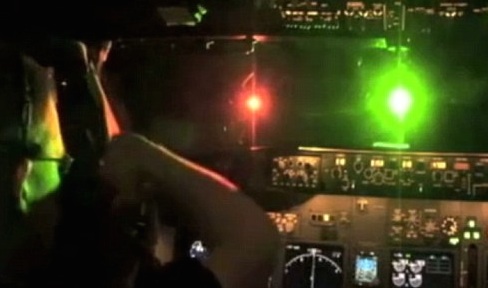 GARDAÍ are hunting the thug who tried to bring down an Air Corps helicopter as it was taking a critically ill baby from Letterkenny General Hospital to Dublin for emergency treatment.

The pilot reported several extremely dangerous incidents as he flew his Augusta Westland helicopter from Donegal to the Rotunda Hospital.

The child, newborn and in need of urgent medical care by expert staff, was aboard the flight with two Air Corps crew, a doctor and a nurse when the incident happened.

The air ambulance came under attack from a laser strike as it passed over Kingscourt in Co Cavan after 10pm on Wednesday.

“This was a very serious incident and it is a growing problem for us. Last year we had 50 reported laser strikes on Air Corps aircraft,” said Air Corps spokesman Brendan O’Dowd.

“This could have had serious consequences for everyone on board and caused permanent damage to the sight of members of the crew. They were not wearing night vision goggles at the time, but laser light strikes are even more serious if crew are targeted when they are.”

He called for anyone with information on the incident to call Gardaí.

It’s understood there are around 50 such incidents every year in Ireland.