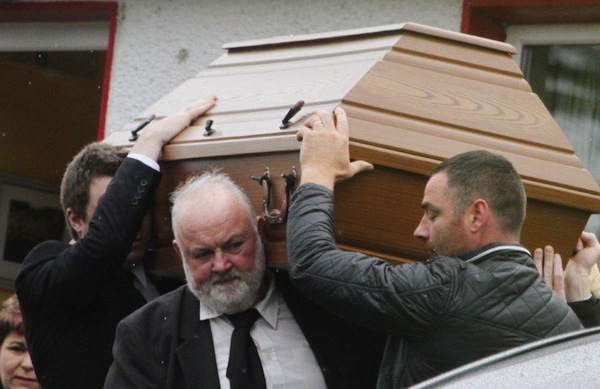 HUGE CROWD OF MOURNERS AT FUNERAL FOR ENDA McLAUGHLIN

MORE THAN 400 people packed into Carndonagh chapel today to pay their respects to a local man who died after being knocked down in Germany following a stabbing frenzy.

Ill Enda McLaughlin, who was 27, had suffered mental health problems for most of his life and had been in and out of prison for violence offences.

His family says he should have been treated in hospital.

Today the parish priest of Carndonagh Father Con McLaughlin said the dead man had been hit by tragedies in his life and had died tragically.

He led prayers for Mr McLaughlin and for the three people stabbed in Germany.

“We pray today for Enda, his family and friends and we pray for the entire community here which is still in shock three weeks after we heard such dreadful news of the events in Germany,” said Father McLaughlin.

“And we also pray for those who were injured and who were left deeply traumatised by the events and for the community and people of Acchen.”

Enda McLaughlin was laid to rest in the graveyard beside the Church of the Sacred Heart.

He was carried to his final resting place by his heartbroken father Patrick as well as his brothers and friends.

The 27 year old from Carndonagh had been released from Castlerea prison a few weeks previously before traveling to Europe.

McLaughlin, who had a string of previous convictions for assault and public order offences went berserk after taking a taxi from Holland to Germany.

He stabbed two taxi drivers and then a Lithuanian truck driver before crossing a road and being killed by an English couple driving a Mercedes car.

The coffin of the late Enda McLaughlin is brought to its final resting place. Pic copyright North West Newspix

HUGE CROWD OF MOURNERS AT FUNERAL FOR ENDA McLAUGHLIN was last modified: July 14th, 2014 by John2