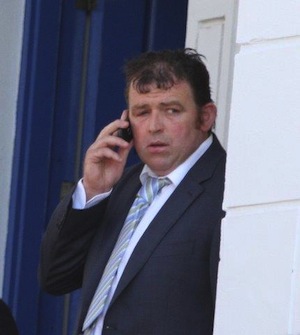 DOORMAN SHOWS REMARKABLE COURAGE TO FORGIVE MAN WHO BLINDED HIM

A well-known doorman who was blinded in one eye after being glassed has asked a judge not to hand down a severe sentence to the man who attacked him.

Sean Gallagher forgave the man who glassed him in the face. Pic copyright of Northwest News Pics.

Sean Gallagher lost the sight in his right eye when he was glassed by Ian Balfour in the Central Bar in February last year.

Judge Matthew Deery adjourned the case until today after hearing that Balfour was offering Mr Gallagher €5,000 in compensation.

He suggested that the offer would need to be increased to allow for Mr Gallagher to get on with his life after hearing he was no longer able to work at the Central Bar.

Before Judge Deery passed sentence today, Mr Gallagher took to the stand and addressed the court.

He said “I want to inform you that I don’t want to see Mr Balfour getting a severe sentence. I fully accept his apology and I want the matter closed.”

Barrister for Balfour, Peter Nolan, informed the court that the offer of compensation from Mr Balfour was now €51,000 which he had gather from family and friends.

The court was told that this did not affect a separate High Court case being pursued by Mr Gallagher.

Judge Matthew Deery said that he was happy to see that Mr Balfour’s family had “put their best foot forward” on the matter.

He said that considering all the circumstances he was sentencing Balfour to three years in prison but suspended the sentence for three years.

Mr Balfour’s family wept at the back of the court as the sentence was passed.

Judge Deery told Balfour “You are lucky to escape a custodial sentence and it is due to the good will of Mr Gallagher.”

The men met outside and shook hands with eachother.