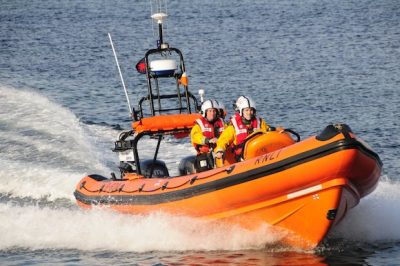 FIVE teenage Spanish students and their youth leader have been rescued off rocks in Bundoran this evening.

The group were climbing rocks at the West End of the town when they became trapped, the RNLI said.

Malin Head Coast Guard alerted the local crew after a phone call from a man out walking who saw the six people stranded.

All those stranded were safely taken aboard the Bundoran lifeboat and returned to shore.

Conditions in the area were said to have been good at the time.

The six, none of whom were injured, were helped on board by the lifeboat crew and brought safely back to the station where they thanked the crew.

The Sligo based Rescue 118 helicopter also arrived on scene.

Helming the lifeboat on the callout Dessie Daly said: This was another shout that had a happy ending.

“We thank the member of the public who made the initial emergency call and remind anyone who sees anyone in danger on the coast to call 999 or 112 and don’t assume that somebody else has done it.”

The Spanish teenagers are staying in the town to learn English.

They were said to have been shaken by the incident but were otherwise unhurt. Arrangements were being made to inform their parents.