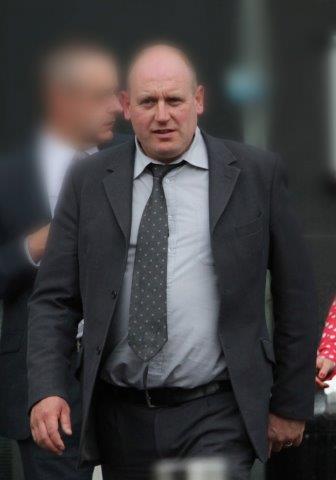 A well-known Donegal doorman may go completely blind after being attacked with a glass in the face during an unprovoked attack.

Sean Gallagher has worked as a doorman at the Central Bar in Letterkenny for the past 16 years.

However a court was told that his life changed forever when he was attacked on February 23rd, 2013.

The father-of-four had allowed a man into the bar to get a drink of water but told him he would not be served any alcohol as he had already had too much to drink.

When he told the man he must then leave the bar, the man turned around and smashed the pint glass into Mr Gallagher’s face.

He was struck with such force that blood from the doorman’s face was sent flying over other customers in the pub.

The man who has pleaded guilty to attacking Mr Gallagher appeared at Letterkenny Circuit Court yesterday.

Ian Balfour, a father of four and farmer from Ballinaleck outside Enniskillen, was on a stag party with friends when the attack happened.

The 38 year old admitted that he had a lot to drink and had got separated from his friends.

He claimed to Gardai that he had been gripped in a headlock by Mr Gallagher and that he struck out while the glass was still in his hand.

However this account was completely dismissed by other witnesses interviewed by Gardai.

Balfour later conceded that he accepted Mr Gallagher’s claims of how the attack happened.

He told the court that he could not explain how sorry he was to Mr Gallagher for what had happened on the night and if he could turn back the clock he would.

He looked towards Mr Gallagher who was seated in the public gallery and said he was humbly apologizing to him.

“From the bottom of my heart I apologise for the injuries I caused you. I came to Letterkenny to have a good time and I don’t know how these events happened.

“I honestly and humbly apologise to you. If I could undo what happened, I would.”

Reverend Nigel Elliott told the court that he was Mr Balfour’s pastor and he had known him for almost two years.

He said that from speaking with him he knew he was genuinely remorseful for the hurt he had caused Mr Gallagher.

“If he could turn back the clock he would,” said Rev Elliott.

The injured man, Mr Gallagher, took to the stand and outlined how his injuries had changed his life and the lives of his family forever.

He said that as well as being a doorman, he was also a small farmer.

“I worked at the Central Bar for the past sixteen years. It is my main source of my family income. I am unable to return to work. I always enjoyed doing the job. I met a lot of friends and a lot of people through it. I am no longer able to do this.

“My work on my family farm is very difficult and I find a lot of tasks very hard to do. I now need help with tasks I would have done on my own. I find it dangerous around cows when they are calving and around machinery.”

He said his insurance premiums have also gone up substantially and he is also conscious that doctors have warned him he may go blind in his other eye.

“This is a worry to me and my family as I don’t know what the future holds.

“Sometimes I wonder if I will ever see my children grow up and I must carry this with me for the rest of my days,” he said.

The court was told that Balfour had €5,000 which he had gathered from family and friends as a gesture to Mr Gallagher.

Judge Matthew Deery asked if there was also any legal action being taken in the civil courts.

He was told there was.

However he queried if Mr Gallagher had much hope for future proceedings if Balfour could only offer €5,000 at present.

He added that if Mr Gllaghaer’s life was in seriously difficulty then he needed help now.

Barrister for Balfour, Peter Nolan, said he would speak to his client and address the court today.

Judge Deery said he will listen to what Balfour has to say and then decide on his judgement.

WELL-KNOWN DOORMAN TOLD HE MAY GO BLIND AFTER BEING GLASSED IN THE FACE was last modified: July 17th, 2014 by Stephen Maguire