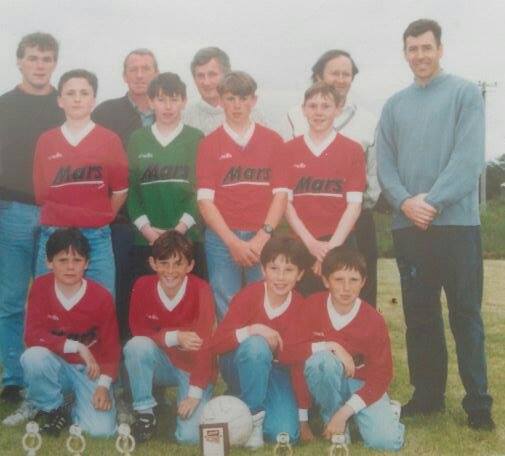 BURTONPORT FESTIVAL: UNIQUE CHARITY FOOTBALL MATCH ORGANISED TO SETTLE DEBATE ONCE AND FOR ALL

The 93 side broke new ground by becoming All-Ireland six-a-side champions for the first time ever. They meet the 95 winning side next week to decide which side was the best.

Next Saturday, before the curtain comes down on the 38th Burtonport Festival an explosive charity football match will take place between old classmates at Keadue N.S.

The All-Ireland winning sides of 1993 and 1995 have decided to lock horns next Saturday the 26th of July, at Central Park the home of one of the most famous Junior clubs in Ireland Keadue Rovers.

For years debate has raged as to who truly was the better side, with arguments still being made both for and against either side.

It has strained relationships over the years and divided families, and next week’s meeting will be anything but ‘friendly’.

A war of words has broken out on social media accounts with Christopher Boyle, a winning member of the 95 side being particularly derogatory in his remarks about the 93 side.

Boyle made a string of stinging comments online as he stoked up the heat between the bitter rivals.

He posted on his Facebook timeline, “It’s been that long since “John ‘Minnie’ Gallagher seen a ball he’ll more than likely grab it next week and try and tie it to a lobster pot. LOL

John ‘Minnie’ Gallagher is a major doubt after suffering a back injury and is undergoing intense rehab in a race to get fit for the match.

The undoubted star of the 93 side Noel Forker will be making a return from Glasgow were he currently resides.

Although as he’s bringing his girlfriend home for the first time to meet the family, there has been suggestions from some quarters that this could be a distraction which may affect his performance.

Wing wizard Seanie O’Donnell has told teammate Gary Ward in no uncertain terms that he will have to cut his hair if he expects to starts in goals next week.

Father time hasn’t been the kindest to the 93 side, and with many of the 95 side still active, they should have the physical edge over there older opponents.

The 95 side have been dealt a blow with the news Kevin Ward is in America on International business and won’t make the match.

However, outside of Ward the 95 side are at full strength and are looking strong.

Managers Joe ‘Corry’ Bonner, Pat Forker and Owenie Ferry all declined to comment on next week’s unique match but are expected to attend.

It promises to be an entertaining occasion with the ‘great debate’ finally going to be put to bed, it should be intriguing match.

The game is being organised to raise funds for the Arranmore RNLI, so get down to Central Park next week and support a great cause.

BURTONPORT FESTIVAL: UNIQUE CHARITY FOOTBALL MATCH ORGANISED TO SETTLE DEBATE ONCE AND FOR ALL was last modified: July 19th, 2014 by Mark Forker