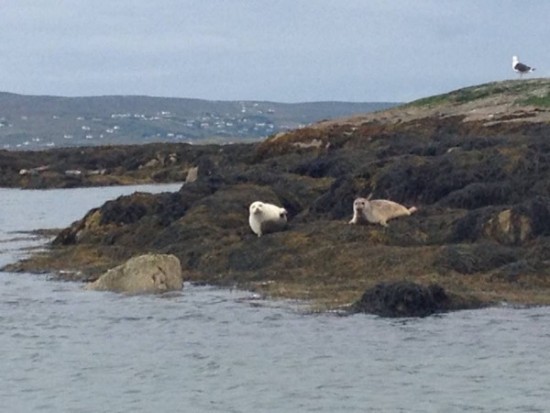 Snowball the seal catching a few rays with his mate in Dungloe Bay yesterday.

Local Burtonport fisherman Danny Breslin captured this snap of two seals ‘chilling’ on the rocks in Dungloe Bay, with one of the seals being completely white.

Danny who has fished in the area for years, said he regularly spots seals during his fishing trips, but said he’d never seen a white seal before.

Danny told Donegal Daily, “I’d see seals quite a bit around the bay, so I was surprised when I seen a completely white one.

“He seemed happy enough to pose for the snap, and in the picture it looks like he’s trying to wave to me.

“I’ve decided to call him snowball, and I hope I see him again when I’m out fishing next.

“On the day I took the picture it was really warm, so I’m sure Snowball was just up on the rocks trying to catch a few rays and get a nice tan. 🙂