WALKERS RESCUED FROM DONEGAL BEACH AFTER BEING CUT OFF BY TIDE

Two elderly walkers out on an early-morning stroll on a Donegal beach had to be rescued when they found themselves cut off by the tide. 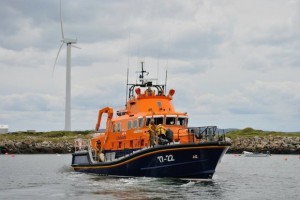 The walkers were out on Maghera beach at Ardara at around 6.15am when the incident happened.

Both the Rescue 118 helicopter from Sligo and the Arranmore Lifeboat were alerted and tasked to the scene.

The Arranmore Lifeboat dispatched a smaller vessel to the stranded walkers and they were then taken ashore to safety just before 7.30am.

The walkers were unhurt.