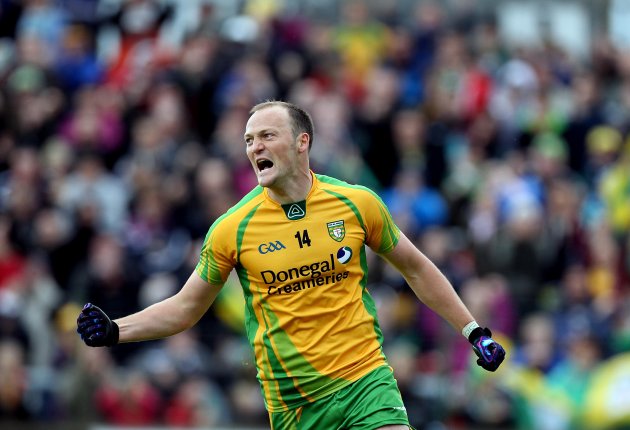 Donegal are on course to win their third Ulster Senior Football Championship in four years as they lead Monaghan by two points at half time in this year’s final in Clones.

Jim McGuinness’s side have taken the chances that have come their way in what has been, at times, an ill-tempered first half as Donegal seek revenge for the defeat by Monaghan in last year’s final.

Karl Lacey put Donegal ahead with an excellent point in the fifth minute and Brian McHugh should have doubled the advantage two minutes later but put his effort wide from a good position.

The lead was increased in the 11th minute when good play between McGee and McNaillias ended with the latter putting over an excellent point.

Colm McFadden put Donegal further ahead with a free awarded for a foul on Neil McGee before Monaghan got their first score of the game in the 14th minute from a free.

Another Monaghan free reduced the deficit to a single point in the 22nd minute but Donegal doubled their lead straight away when following a superb catch Neil Gallagher set up Anthony Thompson to put over the bar.

A Colm McFadden free put three between the sides in the 27th minute.

Keeper Paul Durcan came to Donegal’s rescue to block an almost certain goal in the 31st minute which resulted in Monaghan successfully converted the resultant 45.

McNaillais doubled the advantage in Donegal’s favour on a scoreline with a point in the first minute of injury time at the end of the half.

But a Monaghan free in the dying seconds leaves two between the sides at the break.