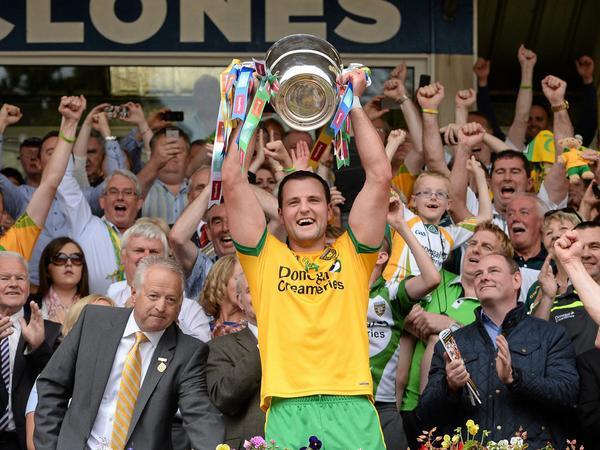 We got our trophy back! The Anglo Celt is back in Donegal hands for the third time in four years and with the Fr. Murray cup also crossing the border last night after the minor team’s victory it was a day of double delight for the green and gold.

Despite being somewhat used to the celebrations that go with an Ulster title win, the management and players took particular pleasure out of yesterday’s win; it seemed to mean more, even judging by Jim’s reaction at the final whistle. There’s a fierce determination within the group to right the wrongs from last year and they’ve now banished the memory of the provincial showpiece 12 months ago.

For a few of course this is their first Ulster medal – Ryan McHugh marked the occasion with a man of the match performance while Odhran MacNiallais kicked three wonderful points over the course of the game.
In the early stages of the match, the blood and thunder of last year wasn’t quite evident; there was nervy, nasty atmosphere and a somewhat claustrophobic tension which mirrored the dead heat in the Clones air. The apprehensiveness affected the players too with three of the country’s leading dead ball specialists, Conor McManus, Michael Murphy and Rory Beggan, all missing attempts at the posts in the opening minutes; indeed McManus would register his only score in stoppage time at the end of the match – and that was a long ball intended to land in and around Paul Durcan’s square.

Donegal coped better in the dour opening exchanges, notching the game’s first three points and Monaghan struggled to cope with Jim’s defensive setup. McGuinness stationed Leo McLoone in the full forward line alongside Colm McFadden and it is an example of the options that the coaching staff have developed over time. Leo’s fabulous fetch on the end line led to MacNiallais’ second point of the day and kept Donegal nudging ahead.

Despite the perception that ‘The System’ is extremely rigid, the players have to be agile and be able to undertake different roles throughout the course of a game. Murphy is the best example of this of course; he spent most of yesterday’s game as an auxiliary centre back alongside Frank McGlynn and on numerous occasions he was even covering in at full-back when Neil McGee sauntered up field. Armagh were the pioneers of this role under Joe Kernan – Tony McEntee used to slot in alongside Kieran McGeeney as Murphy did yesterday.

The purists baulk at such tactics, stunned that one of the game’s eminent attackers is asked to perform such a role yet I’m sure Michael didn’t mind one bit where he played once he was able to climb the steps of the Gerry Arthur stand to pick up the trophy for the third time.
When the team was named during the week, it was assumed that there would be changes before throw-in and Karl Lacey was sure to be one of them. He had a fine afternoon, getting the game’s opening point and also displaying his now trademark, textbook dispossession on Dermot Malone in the second half. You often see defenders – not very good ones – frantically swinging both arms at an attacker hoping to dispossess them; Karl does this but always in a measured way, aimed at the ball and it’s a fantastic skill.

Lacey’s half back counterpart, Anthony Thompson, had a somewhat unusual game – time and again his handling let him down and he, like quite a few of the players, looked nervous. Yet the Glenties man just always seems to make a big contribution and he certainly did that again.

Neil Gallagher was another change to the fifteen named and the Glenswilly man had an outstanding game. Such are his injury problems that he rarely gets seventy minutes in a Donegal jersey these days but he lasted the pace yesterday and that in itself is a huge positive as we move into the All-Ireland series.

There’s an intense, somewhat bitter rivalry building between these teams lately and that always simmered close to the surface yesterday. There were quite a few flashpoints in the game and it was a surprise that both teams managed to keep their full complement of players on the field. The McGee brothers both picked up cautions in the first half but did well to keep their discipline thereafter, crucial in such a tense, turgid battle.

The battles were taking place in the stands too with quite a few slagging matches breaking out amongst the two sets of supporters. Stephen Gollogly didn’t help matters as he put in a high tackle on McHugh, this of course the same player who ended Mark McHugh’s Ulster final participation last year. Monaghan were intent on drawing Donegal into a physical battle and they hit hard and sometimes late. Yet the discipline shown by the men from the Hills was commendable – in the first few minutes Gollogly swung Murphy around by the neck but there was no reaction whatsoever from the Maestro, he just took his free and got on with it.

Donegal had a two-point lead at the break and continued to look in control in the third quarter, stretching the difference out to four. Monaghan’s goal could have been a major turning point as it left just the minimum between them – the next score was going to be crucial. McGuinness’ men got it and added two more and that was the winning of the game.

Patrick McBrearty was to the fore in this period and maybe the decision not to start him was a smart call from Jim in that it reminded the Kilcar youngster that his displays had to improve. Injury curtailed his involvement during the league but in almost every game he came off the bench to good effect and got his name on the score sheet, just like he did yesterday.

It was the captain who had the final say, Murphy nailing a monster 70 yard free to sink Monaghan hearts. It was reminiscent of the free he scored against Ardara in last year’s county semi final to get his club to the final – big moments, big man.

A handling error from Frank McGlynn led to the goal but that aside he was immense throughout. He was the source for many of his side’s attacks and swept up in front of the McGee brothers. Earlier in that move for the goal, McFadden handled poorly to give possession back to the Farney men; Colm’s poor form continued yesterday, having been brilliantly marshalled by Drew Wylie, and his lack of confidence is a worry as we head for Croke Park. He’s working as hard as ever but it just isn’t happening for him at present. That can happen sometimes and you feel that a goal or a big point from play could turn his season around. He still notched 0-4 from frees though and for that alone he’s a vital cog.

Neither Colm nor Michael scored from play yet the team still registered 0-15; maybe Donegal aren’t as reliant on these two as everyone makes out. For a defensive side who supposedly neglect the attacking element of the game, it was a decent score to post and indeed there were some very poor wides and missed chances to go along with that.
So all this means that its back to Jones Road in a few weeks’ time for a quarter final against either Armagh or Meath. The Orchard had our number for quite a few years so a rematch would be something to look forward to.

Looking forward to the semi-final is what the rest of the country are doing though – the unbeatable juggernaut that is Dublin will be there and many believe Donegal are the only team that can stop them. A Dublin street trader even found his way to the market town yesterday, selling headbands for a euro, maybe on a spying mission for August.

Certainly right now, the team is not as fluid or assured as it was this time two years ago. However Jim has broken a seventy minute football match into so many little parts and has a specific plan for each as regards positioning of players, personnel changes from the bench and game plans that you wouldn’t back against him in any contest.

There probably wasn’t a need to go as defensive yesterday as Jim did but maybe this was with an eye on future opponents and honing that watertight system that will be undoubtedly pushed to its limit by the Dubs should the two sides meet.

That’s for another day though; for now it’s a quarter final to think about and a chance to bask in the glory of another Ulster title. Maith sibh lads.