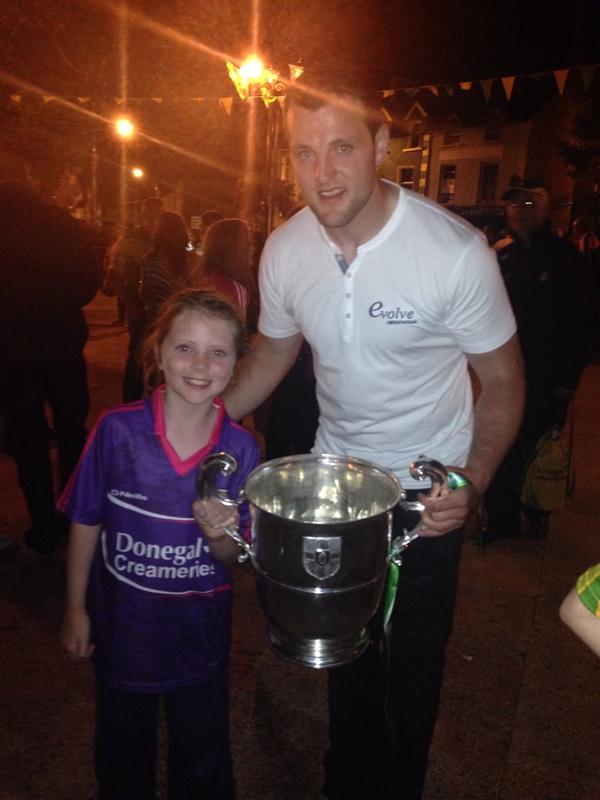 McGUINNESS: EVERYONE HAD WRITTEN US OFF – THAT WAS BETTER THAN WINNING ALL-IRELAND

PROUD Donegal manager Jim McGuinness has paid tribute to his team for bouncing back – after being written off by the pundits.

The Glenties man joined the Seniors and Minors in the traditional reception back in The Diamond in Donegal Town last night as the players and the fans partied into the wee small hours.

And right they were – so many new milestones in the remarkable Donegal man that is Jim McGuinness. First time ever that Donegal won both Seniors and Minors in the same year; and a first victory over Monaghan since 1983.

“We were absolutely wrote off a week out from the Derry match and we’re Ulster champions today.” said Jim, defiant, and happy.

“The boys weren’t going to come off that field beaten. That was the key thing for us.”

Anyone who thought McGuinness was getting complacent about the big occasion would have had that knocked out of them as Jim bounded child-like across the pitch after yesterday’s victory to cheer and hug his heroes, men who are “an absolute privilege to work with”.

“I am just so proud of them. They are immense to work with. Their focus is unbelievable. Their energy, their work-rate and their commitment to Donegal.”

It was a tense and tough game in Clones as Monaghan attempted to bully Donegal off the pitch. Late challenges and several off-the-ball challenges disrupted the game.

But it was fascinating to watch; and brilliant to see Man of the Match Ryan McHugh bounding up the wing, big Neil Gallagher catch the ball so high he should have been wearing an oxygen mask.

Patrick McBrearty and Darrach O’Connor were superb; and Karl Lacey his usual sublime self.

The bridge in Pettigo saw more silverware over it last night; and then on to The Diamond in Donegal Town.

These are special nights. Donegal have won just eight Ulster titles in a century; three have been in the last four years.

The players were once again brilliant with the fans on their return, captain Michael Murphy meeting and greeting as many fans as possible.

And he for one is hoping this year isn’t the last with Jim McGuinness at the helm.

“We want him here for many more years to come,” said the Glenswilly man.

McGUINNESS: EVERYONE HAD WRITTEN US OFF – THAT WAS BETTER THAN WINNING ALL-IRELAND was last modified: July 21st, 2014 by John2