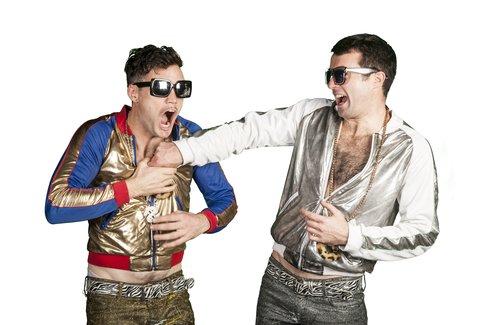 EARAGAIL ARTS FESTIVAL 2014: WATCH THE GOONIES AT THE DRIVE-IN AT ARDS FOREST PARK

There is something for everyone in the Earagail Arts Festival line up for the coming week.

Here’s our guide to the week ahead.

Kids are in for a real treat with Little Howard, the world’s only live interactive animation.

Roger the Pigeon has spent all their money on cookie cutters, his comedy counterpart Big Howard has been diagnosed with being clinically unfunny and there’s a slug in the backstage toilet.

And it’s about to get worse: a sinister figure arrives and Big Howard and Little Howard have to put on the best show of their lives to keep themselves out of jail!

With interactive stand-up, live animation on stage and lots of jokes and songs this really is a show for the whole family to enjoy.

A veteran of the Donegal music scene, Jonathan Smeaton has finally recorded the album his audience has been waiting for.

The singer has played in such bands as Badlands, The Mystery Shoppers and the legendary Son of A Preacher Man and this album is a lively affair, delivering the almighty electric punch that is the trademark of Jonathon’s live shows.

Recorded in The Grooveshack, Ramelton and engineered and produced by Billy Robinson, QSO features a selection of fine musicians from Peadar Coll on guitar and fiddle to Billy Robinson on bass, Laurence Doherty and John Laurence McCallion on percussion and drums, Orlaith Gilcreest (backing vocals) and Pat Crowley on keyboards and piano.

Given Jonathon’s popularity and longevity in the Donegal music scene, guests can expect a host of special guests and surprise performances in what promises to be one of the more unpredictable and lively nights of the festival.

In the Regional Cultural Centre on Wednesday night, pianist Satoko will perform a special concert of a selection of Irish and Japanese composers’ piano works including Toru Takemitsu, Jo Kondo, Yori-aki, Yuji Itoh, John McLachlan and a world premiere by Paul Hayes.

Following sell-out shows in Holland, Switzerland and The Half Moon Theatre in Cork, the fame obsessed and socially impaired Strut brothers are coming back to Donegal.

Join Ireland’s most emotional dancers as they share their “bullet proof” secret to life and happiness.

In this motivational, roller-coaster of a show, watch Sean and Seamus hold it together as they dance and bicker through a hilarious hour of physical and “meta-physical” comedy.

Those who haven’t seen this show before are in for a treat, and those who have, are always left wanting more.

Lords of Strut formed in 2008 and have since toured 18 countries, winning numerous awards for their unique blend of comedy, theatre and circus.

After their Earagail Arts Festival performance, the Strut brothers are heading to Edinburgh for 26 dates, so make sure to catch them while they’re here.

Earagail Arts Festival has partnered with Belfast Film Festival to bring back the extremely popular Drive-In at Ards Forest Park.

The screening on Friday, 25 July is the horror film Evil Dead 2, which was decided by members of the public who voted for their preferred film on the Earagail Arts Festival Facebook page.

Places are allocated on a first come first served basis.

Patrons should note that FM radio is essential – if the car radio does not receive an FM frequency signal, drivers should bring a portable radio with them to be able to receive the film dialogue to their car.

Access only to car park via main park entrance from 7.30pm. (follow signs N56 to / from Letterkenny / Dunfanaghy).

No vans permitted and MPVs, 4x4s and Jeeps will be parked at the rear of the car park to ensure visibility of the screen from smaller vehicles.

Earagail Arts Festival asks that all patrons co-operate fully with stewards and staff and respect the ecology of the park by using bins and waste disposal provided.