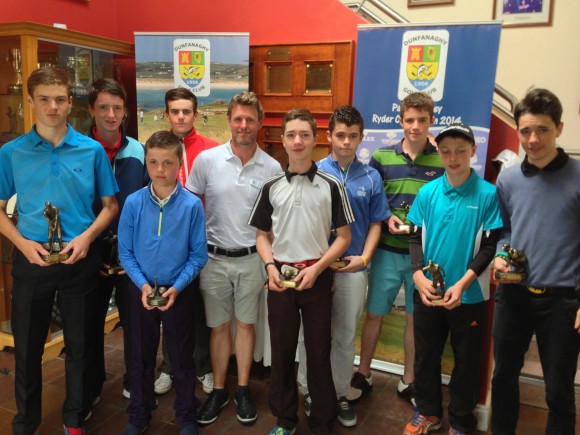 Young hopefuls came from far and wide to compete in the championship, resulting in an exceptionally high standard of golf. Last year’s champion Cian McGarvey (Cloughaneely) was beaten on break of tie for the overall championship by Jack Patton (Letterkenny). Both players finished with gross scores of 72. Jack’s back nine total of one under par was helped with an eagle on the tenth hole to secure the prestigious title.

The under 16 category was very much a family affair, as brothers James and Niall McCormick (Dunfanaghy) battled all the way to the final hole for the title. At the end, Niall won on break of tie from James, both with gross scores of 79.

The under 14 category was won by Paul Doherty (Cloughaneely) on break of tie from Cian Harkin (Letterkenny) with excellent gross scores of 76. It was a wonderful victory for Paul, as Cian was favoured by many for the title.

During the presentation, Seamus thanked Mick McGinley for this kind sponsorship and Dunfanaghy Golf Club for hosting the championship. Organising has already began for the 2015 championship, which will hopefully be even bigger!