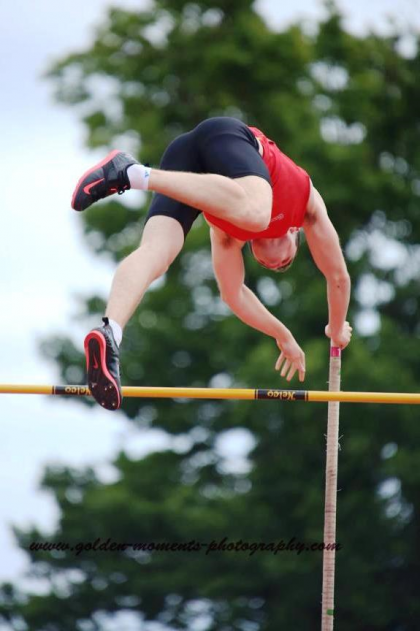 The GloHealth National Senior Track and Field Championships at a sun drenched Santry Stadium on Saturday and Sunday last was the best supported, had a the largest entry and was the most competitive in the history of the sport.

Places were at stack for the upcoming European Championships in Zurich, Irish titles were on the line and athletes in most instances had to negotiate heats to qualify for finals.

UCD/Letterkenny’s Mark English and Finn Valley’s Mark Hoy qualified from Saturday’s 800m heats for a Sunday mid afternoon ten men final. English was in mid pack as the race reached the bell, eased his way to the front with 200m to go, quickly opened a three metres gap and came home an impressive winner in 1min 49.91secs. Mark Hoy, who has made vast improvements this season – getting his 800m time down to close to 1min 50secs — came home in 8th position -1min52.23secs. Following the event the Irish selectors, automatically, confirmed Mark as an entrant for the Europeans.

Anne Marie Mc Glynn, Lifford AC, possibly the most improved Irish female middle distance athlete of 2014, ran a superb 16mins 22.88secs for a third place finish in the 5k on Saturday evening behind Zurich bound and winner Fionula Britton and in a most competitive 1,500m final on Sunday finished 5th in an equally good time of 4mins 24.28secs. Dempsey Mc Guigan, Finn Valley, was over 60metres on a number of occasions in the Men’s Hammer and eventually got out to 64.47metres for silver. Dempsey will contest the Common Wealth Games for Northern Ireland in the coming ten days. Tori Pena, Finn Valley, Irish record holder for the Pole Vault, with a best of 4.20m took silver behind Belfast’s Zoe Brown, 4.30m.The later also travels to Glasgow to contest the CWG. John Kelly, Finn Valley and Geraldine Stewart, Tir Chonaill AC were bronze medal winners in the Shot Putt -John getting out to 15.27m and Geraldine to 13.10metres.

The SIAB Home countries T/F U17 International held in Cardiff on Saturday had a number of North West school/club athletes representing Ireland. Somer Lecky, Finn Valley/Strabane Gr. with a best of 1.68m was a bronze medal winner, Caolan O’Callaghan, Tir Chonaill AC/Abbey Voc. , had a PB performance of 12.92m/Triple Jump for a 5th [lace finish while Brendan O’Donnell, Lifford AC/St Eunans was 6th in the Hammer with a best of 49.61m. Christopher O’Donnell, Nth Sligo AC/Magh Eine College, Bundoran, was the lead athlete in an exciting 4 x 100m relay where Ireland finished 2nd in 42.19secs – .2secs behind winners England.