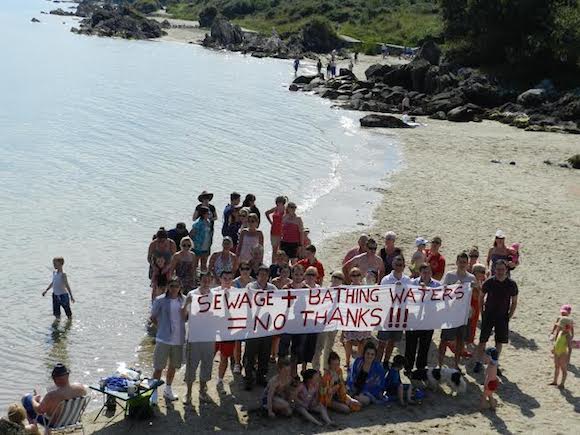 Visitors plus residents of Moville and Greencastle came together on Glenburnie beach at Carnagarve on this evening with the sole intent of sending a strong united message to Irish Water and the Environmental Protection Agency.

This is where a proposed sewage discharge pipe will enter the sea….with those behind admitting it will cover the coast with sewage at times of heavy rain.

“It has no place in this idyllic setting,” said local campaigner Enda Craig.

“Visitors and locals alike are dumbfounded at the lack of reasoning, logic and plain common sense regarding this proposal.

“It is now high time that all local residents lobbied their political representatives and insisted this amazing series of golden pocket beaches are formally designated by Donegal Co Council to enable them to be safeguarded for all times.

“These beaches, bathing waters and shore walk are this community’s most important local assets both economically and spiritually and must be guarded and protected at all costs from ill informed and ill advised bureaucratic decisions.

“It could easily be described as a potential act of vandalism.”

The CFCE would like to thank Deputy Padraig Mac Lochlainn TD, Cllr Jack Murray and Clr Albert Doherty for attending the gathering.

Local Cllr Martin Farren was unable to attend and sent his apologies.