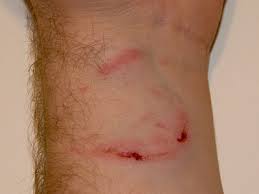 ANGER AS ANOTHER TOURIST SAVAGED BY A DOG AT MALIN HEAD

COAST Guard officials had to go to the aid of a tourist again today – after he was badly bitten by a dog.

It’s the first reported incident of its kind in Malin Head this year.

But it follows several incidents in the same area last year when FOUR tourists were bitten in separate incidents.

That sparked a Garda probe.

In a statement today, the Irish Coast Guard had to warn tourists going to Malin Head to be particularly careful.

“People should be aware of this incident and several other incidents last year,” said a spokesperson.

Tourists have been flocking to Ireland’s most northerly point this year – especially since more than 40 dolphins have taken up residence in the waters off the local beach.

It brings to five the known number of incidents involving foreign visitors to the area.

In August last year a Spanish tourist had to be taken to hospital after suffering horrific bite injuries.

Then two Italian tourists ran to the Coast Guard station for help after also being attacked.

That followed an incident last July in which Belgian tourist arrived in Malin town seeking help. He had horrendous leg injuries after being mauled.

Gardai are probing the latest attack.

Dolphins in the water at Malin head today. Tourists have been flocking there to see them.

ANGER AS ANOTHER TOURIST SAVAGED BY A DOG AT MALIN HEAD was last modified: July 25th, 2014 by John2