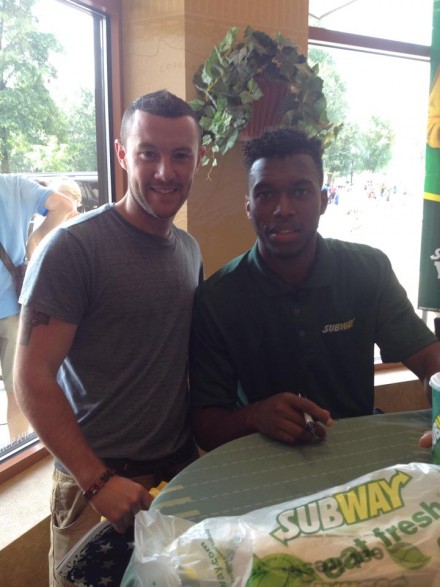 Dungloe GAA player Joe Sweeney was left astonished when he had his Subway sandwich made for him by Liverpool star Daniel Sturridge.

The Liverpool stars are currently on a pre-season tour in Boston and played Roma at Fenway Park.

Sturridge has endorsed the Subway brand in the past and was the face of their World Cup advertising campaign.

Sweeney, a student at GMIT, is in Boston for the summer working and playing football for Donegal Boston.

He a nephew of former Donegal All-Star Adrian Sweeney and couldn’t believe it when  he saw the two England internationals preparing subs for customers.

The Donegal man posted a video of Sturridge preparing the sub on his Facebook timeline with a caption that read “It’s not everyday Daniel Sturridge makes you a subway!!”

He added “They were both sound and were having good craic with the customers in the shop, and to be fair Sturridge made a great Subway too, so it was all good.

“He’s a brilliant player and he has a cracking left foot, although I think Uncle Eddie’s was better.”

DONEGAL GAA PLAYER GETS HIS SUBWAY MADE FOR HIM BY LIVERPOOL STARS was last modified: July 26th, 2014 by Mark Forker