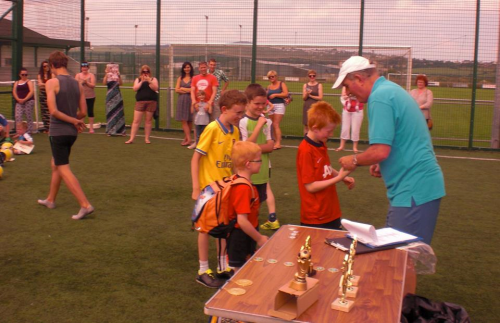 All the soccer stars of the future turned out this week at the Sean Davis Soccer Academy held at Bonagee Showgrounds, Letterkenny.

Boys and Girls aged 5 to 17 years enjoyed the excellent weather conditions and the superb coaching on offer from quality F.A.I. and European coaches.

Sean reminded everyone at the presentation of awards that his Academy will return to Drumbar Utd. Grounds, Donegal Town, on Tuesday 29th July until Friday 1st August.

WINNERS OF THE SPANISH LEAGUE:

WINNERS OF THE PREMIER LEAGUE:

WINNERS OF THE CHAMPIONS LEAGUE:

WINNERS OF THE WORLD CUP:

Player of the Week [Under 17]: Karol McGinley

Player of the Week [Under10]: Niall McCrossan

Goalkeeper of the Week: Fintan Doherty