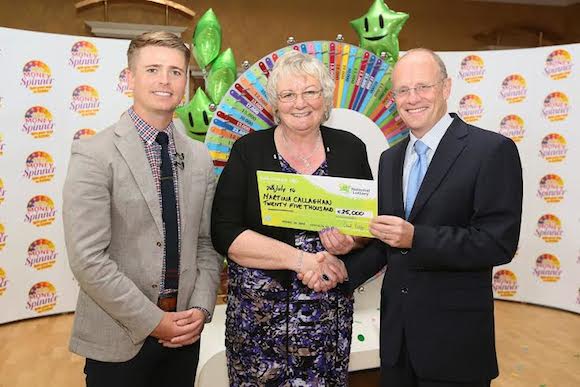 DONEGAL woman Martina Callaghan has something to cheer about today – she’s just won €25,000 including luxury holiday on a lotto game show.

She won the cash on RTE’s Money Spinner TV programme.

Martina is a retired factory worker.  She is from a family of six: James Anthony, Margaret Theresa, Veronica and John, who live in the area and brother Marius who lives in England with his wife Margaret and daugher Narelle.  She is close to her grandnieces and grandnephews Amy, Liam, Chloe, Lucy, Niamh and Eamer.

Martina normally puts her nephews and nieces names on the Scratch Card but for some unknown reason she put her own name on this particular Scratch Card for the first time ever and had the luck to be drawn!

Martina walks every day. She loves listening to country and western music, especially Big Tom. She would have travelled everywhere to see him – that’s her Garth Brooks! She last saw him live last October.

Her grandniece Chloe gave her a teddy bear to bring with her for luck when spinning the wheel.

“I can’t believe it, I still feel I’m chatting about somebody else.”

Martina hasn’t even thought about how she will spend her winnings as she just felt so lucky to be a Money Spinner contestant.