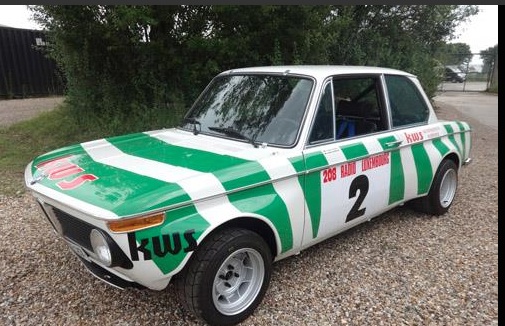 The BMW 2002 on offer next month was the second of just two cars built by BMW Motorsport in 1974/75 and fitted with a modified M12/7 Formula 2 engine.

The current owner first remembers seeing the car in June of 1975 where it competed in and won the Donegal International Rally with the drivers Warmbold/ Davenport. The car was entered into that event by a company called KWS Autotechnic based in Kobenz with sponsorship from Radio Luxembourg….and went on to win.

“It still looks resplendent in this white and green ‘radio Luxembourg’ colour scheme and is finished in what only can be described as excellent general condition,” said a spokesman for auctioneers Coy’s from Surrey, England.

The sister car was purchased by Max Heidegger of Liechtenstein and was successfully raced in Europe including the 24hr Le Mans, even taking a win over a factory CSL. It was subsequently destroyed in a racing accident leaving the Donegal rally car the only one of its kind in existence.

Rallied in period by Warmbold the car was notably driven by Bjorne Walldegaard and Ari Vatanen was also co driven on many events by Jean Todt, the current president of the FIA.

In 1976, the car was purchased by the BMW importers of the time for Northern Ireland, Isacc Agnew Ltd. of Belfast, who purchased the car from the German Rally Champion Achim Warmbold; it was driven sparingly by the owner’s son until the current vendor purchased the car in 1978 with a recorded mileage of just over 9,000kms.

The car was rallied by the current vendor and his brother in local Tarmac stage rallies. The vendor even recalls using it once for his journey to work when he worked for the Ministry of Agriculture in the North!! The car was always very reliable, despite having 285bhp at 10,000rpm when required!!

In 1980 the vendor decided to store the car on his local farm near Glenavy, Ireland. The car remained in storage until 1993 when it then became the subject of a restoration. This has almost now been completed, and culminated in an engine rebuild by arguably Europe’s best BMW M12 specialist Mr Lester Owen of Telford.

“The vendor makes it quite clear to us that due to the length of time the car has been in his tenure its restoration is over 90% original,” said Coys.

“Interested parties should note the car is accompanied by documentation from BMW Motorsport GmBh- most notably these two cars were the first project BMW motorsport as a standalone division under the capable instruction of Jochen Neerpasch.

“Finished to ‘museum type’ quality this highly important piece of BMW history is one of a kind. For the BMW collector this is a once in a life time opportunity to acquire the only remaining example and an important part of BMW racing history. Eminently eligible for a huge variety of events.”

This car is going under the hammer at Coys forthcoming Auction – at the AVD Old Timer Grand Prix, Nurburgring Germany August 9th 2014.