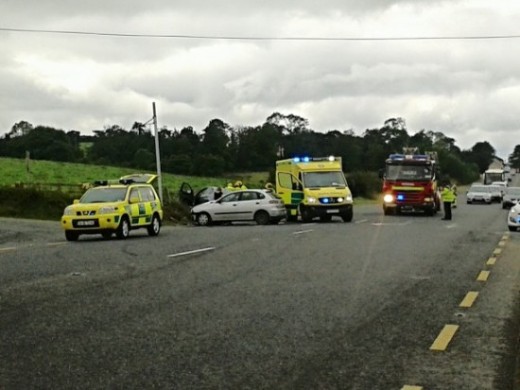 Scene of the two car collision just outside Murray Motors in Manorcunningham. Pic by John Boreland

Emergency services are currently attending the scene of a two-car collision on the main road from Letterkenny to Derry.

The accident occurred just past the garage of Murray Motors in Manorcunningham.

It’s the second accident in the vicinity in the last week following an accident last Thursday afternoon.

Two ambulances, Gardaí and members of the fire brigade are also in attendance at the scene.

It is not yet know if any occupants of the vehicles have been seriously injured.

Gardaí are warning motorists to expect traffic delays in and around the area until the crash site has been cleared, and they carry out their investigations into the accident.

We’ll have more on this story when more detail emerges from it.