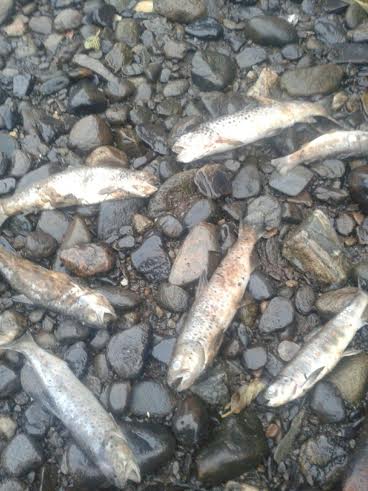 Dead fish in the Deele: Picture by Cllr Liam Doherty

THERE is anger amongst anglers and local people after a massive fish kill on the River Deele.

“As a local Councillor and a keen fisherman myself it was brought to my attention of fish remains on the shore of the River Deele in Convoy, I went to the area earlier today and it appears to me that fish have been dying in the local area over the past number of days,” he told Donegal Daily.

“Some of the remains are badly decomposed which tells me they have been there a number of days, this isn’t the first time that I have raised concerns of pollution in the Deele.

“I have contacted the relevant authorities and urged immediate action to be taken to remedy the situation as soon as possible.”

An investigation has begun into the fish kill – the exact numbers of dead trout and salmon isn’t clear.

“I am aware that water samples have been taken as part of an initial investigation, I will be monitoring the situation very closely as this is deplorable,” said Doherty.