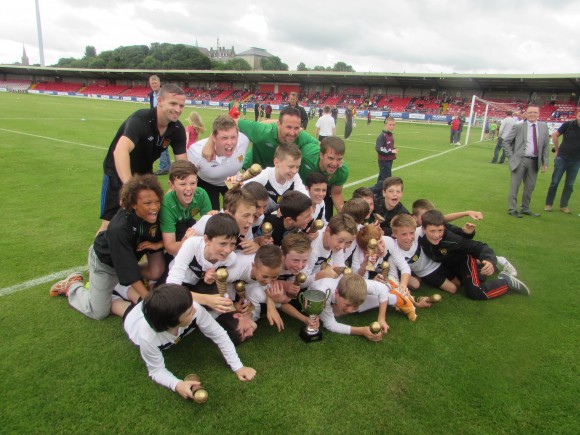 Donegal manager Kevin McHugh gets cooled down by his side after their Foyle Cup success.

Donegal U12’s Schoolboys manager Kevin McHugh says that he was absolutely delighted his side won the Foyle Cup on Saturday, but insisted that player development remains the key objective for his squad.

His U12 Donegal Schoolboys side won the competition in convincing fashion by defeating a Cavan/Monaghan select side 2-0 in the final at the Brandywell on Saturday afternoon.

It was the style of play produced by McHugh’s side that particularly caught the eye, and in the end there was no doubting that Donegal were deserving winners of the competition.

A few months ago the same group of players were left heartbroken after losing the All-Ireland final on penalties to Waterford.

They exacted revenge on Waterford in the quarter-final of the Foyle Cup, and McHugh was delighted they won the competition to erase the pain of the All-Ireland defeat.

However, McHugh says that success for him isn’t determined by how many competitions his side win.

“Look I’m absolutely delighted the boys won the Foyle Cup, it’s an unbelievable achievement and they thoroughly deserve it.

“Losing the All-Ireland final to Waterford was difficult for them, but they showed great character all throughout the Foyle Cup, they’re a joy to work with.

“The sole focus we have is developing technically good players all over the pitch, everyone of our players are comfortable on the ball, and they can all adapt to playing different formations.

“We’re trying to develop all aspects of their game, and that includes tactical development.

“We played several different formations over the course of the week, and the lads adapted to every one of them with ease, and that was very pleasing from a coaching point of view.

McHugh, ably aided by assistant coaches Mel O’Donnell, James Doherty and Andrew Wilson have been working with the squad since November.

He praised the work of his own staff, but also said the coaching the players receive at their own clubs is excellent.

“We have the lads once a week, we’d like to get them more often that that, but it’s not always feasible.

“The coaching they receive at their clubs is top class and that’s reflected in the success we had this week, we work with them once a week, but they’re with their clubs week in week out and those coaches deserve a huge amount of credit.

“I have to thank Mel, James and Andrew as well, they’re first class with the lads and they each bring something different to table, between us all we have a good dynamic team.

McHugh says his side will take a much deserved break now and prepare for next season.

Assistant manager Mel O’Donnell said the hunger, effort and dedication of the players was fantastic and said they fully deserve everything they achieved.

“The effort they boys showed all week was immense, they’re a credit to themselves, their clubs and the county.

“Training every Sunday since November, it’s not easy, it’s a tough slog, but their attitude and dedication is brilliant.

“The attitude was second to none all week and this was reflected in them wining the competition.

Well done to all teams and coaches involved.