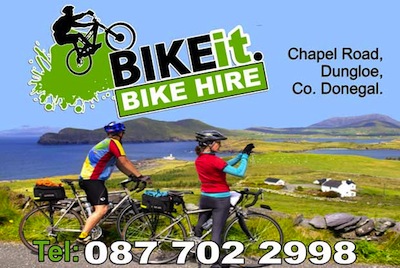 The owners of a Donegal bike hire company claims it is the victim of a campaign of intimidation and sabotage aimed at putting it out of business.

BIKE IT is being forced out of business.

Bike It, which is based in Dungloe, was set up last year to give tourists a chance to see The Rosses by bike.

But the company claims there has been a “sustained campaign” to close them down.

They claim that a number of expensive advertising signs have been pulled down and broken up while thousands of leaflets advertising the business have also gone missing.

Owner Michael Connolly, who runs the business with his sons, says he is completed frustrated by what has happened.

The matters have been reported to Gardai and he is asking whoever is responsible to stop.

“My sons and I put a lot of time and effort into providing a service for tourists to the area and are extremely disappointed at the attitude and behaviour of some individuals whose only intention is to vandalise and destroy the efforts of others who are trying to make a contribution to the local community.

“We were given permission by the local town committee to advertise our business from the local tourist office which we were very grateful for.

“We erected a sign outside the door of the tourist office door which was well secured to the wall and within hours it was ripped down. Other signs have gone missing from various other locations also.

“The matter is been investigated by the Gardai and I am appealing to the public for any information relating to this crime,” he said.

BIKE HIRE COMPANY CLAIMS IT IS BEING PUT OUT OF BUSINESS BY VANDALS was last modified: July 30th, 2014 by Stephen Maguire