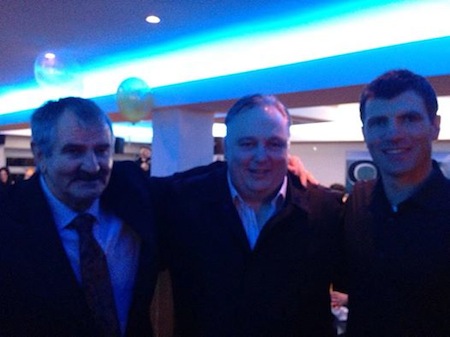 There has been widespread sadness and shock at the sudden death of Brendan Ryan.

The husband of Kathleen, father of former boxer Danny Ryan and hairdresser Bernie Ryan, Brendan was one of life’s true characters.

As well as a loving father and grandfather, he will be remembered as a driving force behind amateur boxing in Donegal.

He helped set up Raphoe Boxing Club in 1988 as well as steering his son Danny to a hugely successful amateur and professional career.

His close friend and boxing colleague Peter O’Donnell told Donegal Daily that he was just devastated by Brendan’s passing.

“Nobody will speak a bad word about Brendan Ryan because he was such a decent man.

The late Brendan Ryan who passed away today.

“We have been down a lot of roads together and we could tell some stories.

“We was a good husband and a great grandfather to his grandchildren.

“I will miss him deeply as I know so many people will,” said Peter.

As well as boxing Brendan was a keen Finn Harps fan and could be seen at all of Finn Harps home games.

He retired from Donegal County Council two years ago.

The staff of Donegal Daily would like to extend their sincere sympathy to the Ryan family at this time.