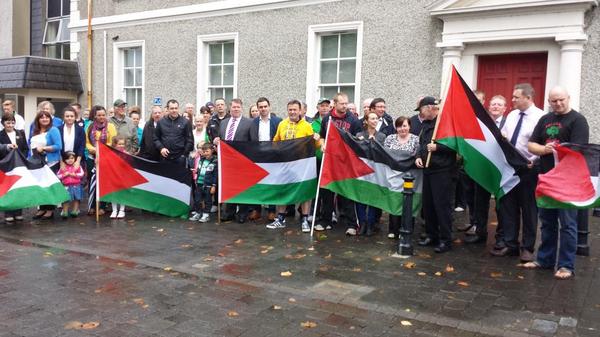 Donegal County Council has today passed a motion expressing solidarity with the people of Gaza and calling for the expulsion of the Israeli Ambassador to Ireland.

The motion also called for the Israeli Government to immediately end all hostilities and to enter into peace talks with Palestinian representatives.

The motion received unanimous cross-party support and was proposed by Cllr Gary Doherty of Sinn Féin and seconded by Micheál Cholm Mac Giolla Easpaig and follows a protest outside the County House in Lifford on Monday in support of the people of Gaza.

Cllr Doherty said: “I believe it is time that the Irish people took collective responsibility for what is happening is Gaza. We cannot stand idly by and watch as hundreds, even thousands of innocent civilians are murdered by the state of Israel. I believe it is our duty to stand up for these people and to defend their rights to life.”

He continued: “Gaza is such a small area of land, and the onslaught that they are being subjected to is beyond comprehension for most people in Ireland. Were we to apply the geography of Gaza to Donegal, we would be looking at a patch of land stretching from Bridgend to Killygordon, populated by 1.8 million people.

“These people have no freedom of movement. They are surrounded by a huge wall, restricted access to the sea and prevented from travelling on many roads. They are now being bombarded by a concerted bombing campaign by one of the most advanced war machines in the world. The result are the sickening images of people being murdered on their own streets.”

“Since the current Israeli campaign began, over 1,000 Palestinians have been killed. Over 200 of these have been children. In the last week we have seen hospitals and schools destroyed, and today we have even seen a graveyard attacked with dead bodies re-interred.

He continued “I saw an image last week of a Palestinian man carrying a plastic bag which was full of meat. The bag contained the remains of his four year old son who had literally been shredded by an Israeli fachette bomb, which consists of explosives wrapped in steel darts. This is not acceptable to any right thinking individual.”

“Today, Donegal County Council has sent a clear message to our Government that we abhor these atrocities. The Israeli Ambassador needs to be expelled until his Government takes steps to rectify this horrible situation. If every country took that step, and sent a clear diplomatic message to Israel that what they are doing is wrong, then hopefully we may start to see a softening of Israel’s approach to Gaza.”