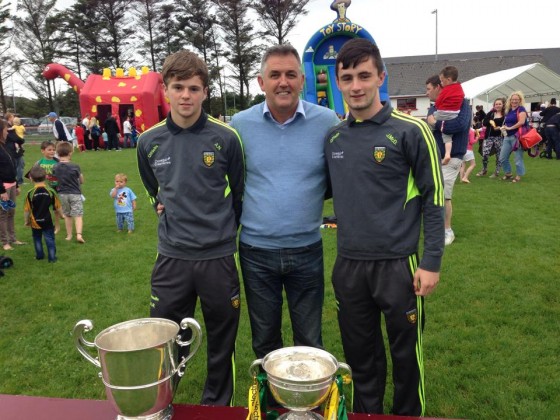 The photograph was taken at the annual Super Valu Family fun day, which is held at Rosses Park, home of Dungloe GAA club.

Coyle has family in nearby Gaoth Dobhair, and has been a regular visitor to Dungloe for a number of years.

Coyle visited the Family fun day event and caught up with the minor stars as they relax before Saturday’s crunch All-Ireland Minor quarter final clash with Roscommon.

Coyle established himself as an excellent manager in Scotland after successful spells with Falkirk and St.Johnstone in Scotland.

His greatest feat in management was when he took lowly Burnley into the Premier League in 2009 for the first time in the club’s history.

His last managerial appointment was with Wigan Athletic but that spell proved unsuccessful for Coyle and he was sacked in December 2013.

He was strongly linked for the vacant position at Celtic FC following Neil Lennon’s departure from Parkhead but the Celtic board opted to go for the inexperienced Ronnie Delia.

After last night’s Champions League disaster it may well prove to have been a poor decision by Celtic executives.

Coyle admitted to being a Celtic fan all his life, and said the opportunity to manage the Glasgow giants would be a dream come true.