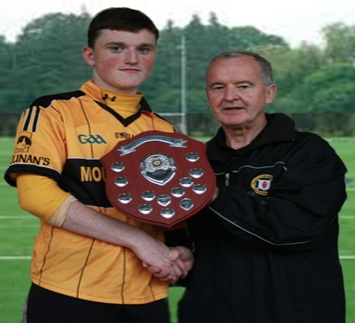 Niall: Picked to play football for his Province

St Eunan’s GAA Club would like to congratulate Niall O’Donnell following his selection for the Ulster U16 Squad.

On June 30th, Niall was selected to attend the Phoenix Ulster GAA Elite Academy. The Academy identifies the best young Under 16 footballers and hurlers within Ulster and exposes them to the rigors of high performance development over a two day camp at the University of Ulster at Jordanstown.

At the camp, the young players were introduced to an environment focusing on high performance, including player welfare & general lifestyle management. In essence the lads experienced what it would be like to be a full time professional player.

Following the camp, Niall and Aiden McLaughlin from Naomh Padraig, Muff were selected to represent Ulster against Dublin U17s on 5th August in the Athletic Grounds, Armagh.

The Phoenix Ulster GAA Elite Academy has proven to be a major stepping stone for young players who progressed to play Minor and Senior for their Counties. Current County stars who attended the camp include Michael Murphy and Paddy McBrearty.