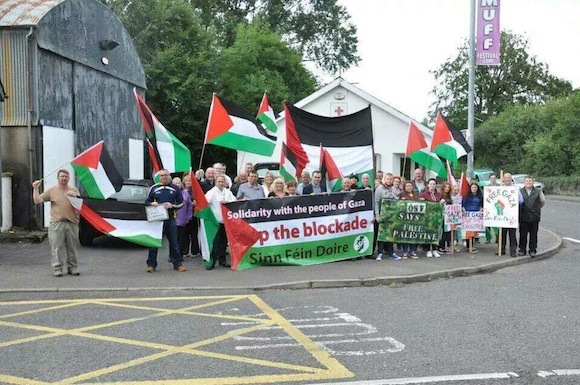 PEOPLE OF INISHOWEN SHOW THEIR SUPPORT FOR PEOPLE OF GAZA

The solidarity protest held in Muff in support of the people of Gaza.

People from across Inishowen gathered in Muff  for a vigil in solidarity with the people of Gaza.

A large crowd gathered with Palestinian flags and other banners calling for freedom in the the oppressed region.

Cllr Jack Murray, who visited a refugee camp in Palestine this year, paid tribute to the many people who turned out for the event.

“I want to commend the huge amount of people who turned out to our vigil in Muff which was held in solidarity with the people of Palestine.

“It was an expression of the support of this community with a beleaguered people. It was an opportunity for the people of this area to express our horror at the slaughter of the Palestinian people by Israeli forces,” he said.

Cllr Murray visited Palestine recently and said he was dismayed by the second class status which the Palestinians live under.

“They are ruled by an apartheid state which refuses to acknowledge their rights as human beings.

“The current assault on Gaza is indiscriminate slaughter of men, women and children. Hospitals and schools are seen as fair targets. The UN has recently stated that there is nowhere safe in the Gaza strip for the 425,000 people who have been made homeless by the bombardment.

“With this in mind, I welcome the successful passing of a Sinn Féin motion in Donegal County Council which called for the expulsion of the Israeli ambassador to Ireland and condemned the cowardly stance of the Irish government in abstaining on a UN vote on human rights in Palestine.”

He added he believes strongly the ambassador should be expelled and that Ireland should not acquiesce with modern day apartheid.

PEOPLE OF INISHOWEN SHOW THEIR SUPPORT FOR PEOPLE OF GAZA was last modified: August 2nd, 2014 by Stephen Maguire